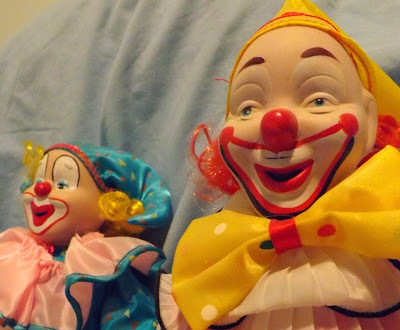 Every day is something day, but forget clown day, because clowns have an entire week, from Aug 1 – 7 every year. It was even written into American law by President Nixon. To celebrate, here are 15 facts about funny men!

1 – The word clown is believed to come from the Icelandic word klunni, meaning a clumsy person.

2 – The earliest record of the word clown dates from around 1560.

4- Grimaldi was the first panto clown to wear white face make-up instead of a mask.

5 – The full name of Krusty the Clown in The Simpsons is Herschel Shmoikel Pinchas Yercham Krustosky. He’s voiced by Dan Castellaneta.

6 – The declaration of International Clown Week was passed into US law by President Richard Nixon on August 2, 1971.

7 – Traditional clowning centres on the relationship between the ‘whiteface’ (the straight man) and the ‘auguste’ (foolish or mischievous clown).

8 – All straight man/funny man comedy double acts, such as Laurel and Hardy, are derived from circus clowning.

10 – Coulrophobia describes the fear of clowns.

11 – The world’s oldest clown society, Clowns International, was founded in 1947.

12 – The first killer clown in fiction appeared in the 1892 Italian opera Pagliacci.

13 – Johnny Burnette had a hit with Clown Shoes, written by PJ Proby.

14 – Ronald McDonald was first played by Williard Scott in a 1963 TV commercial.

This post originally appeared on the author’s blog Circus Mania.