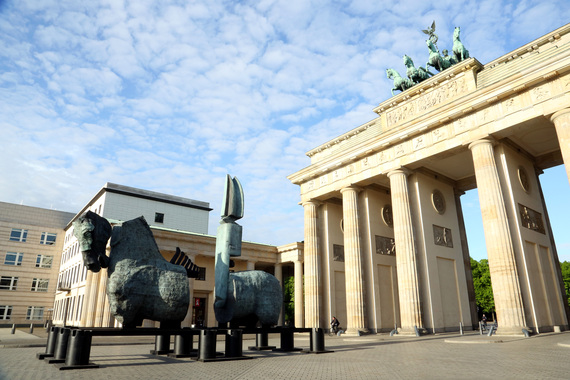 Monumental horses have taken up residence in Berlin in front of the Brandenberg Gate. Mexican artist Gustavo Aceves continues to tour Europe with his unique travelling exhibition ‘Lapidarium’. The open-air show is another successful example of public art in the open air. The large bronze and marble equine sculptures were installed in May in the Pariser Platz, as part of cultural commemorations to mark the 70th anniversary of the end of WWII in Europe.

The large sculptures, ranging from 3 meters to 12 meters in width, are unfinished in appearance, often with cracked surfaces. They are scarred or fragmented in stark opposition to the four bronzes horses above the Brandenberg Gate, one of Germany’s most iconic landmarks. Several horses appear skeletal and include human skulls within them to emphasise the tragedy, struggle and barbarism that migration is historically associated with.

The artist said he wished to comment on contemporary concerns including the wave of immigration across Europe and the terrors faced by asylum seekers crossing the Mediterranean. Lapidarium serves as a shattering visual reminder of the migrants who perished en route to their destination. He said, “I was struck by the tragedy in 2009 when a number of people from Africa died who wanted to move to Italy… The horses reflect these movements around the world. There is a contemporary resonance with migration today”. The animals recall the shipwrecks on coasts in Veracruz, Essouira, Timbuktu and Istanbul. 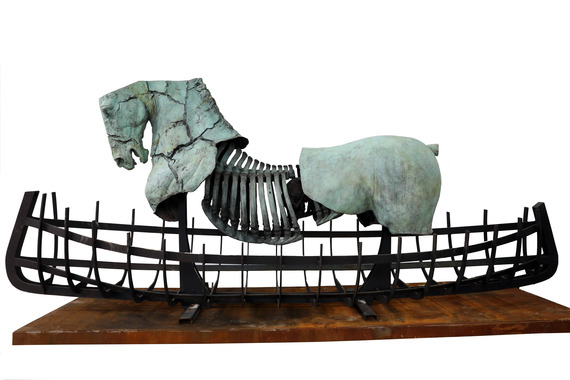 The sculptures serve as a reminder of the past and a warning to the future. He said, “Lapidarium tries to be a silent witness. So voiceless like the silence of immigrants halfway. I also wanted to convey the movement of people that began with the first humans from their origins in East Africa to their current locations around world.”

This migration is symbolized by a horse, which is used here as a metaphor, but also the sea. In one sculpture he depicts a canoe full of people. He said, “women and children and men are seen here in the heart of the sea, in this boat that is to bring them to the other side in order to survive”. The artist suggested that each work forms an obituary, harking back to the day when man first left Africa.

Aceves has created his own visual language, layered with cultural references and symbolism. His work often revisits ideas from the great masters within the Western pictorial tradition. Earlier paintings share an affinity with Michelangelo and and Rembrandt, but also the monumentalism of Mexican murals. 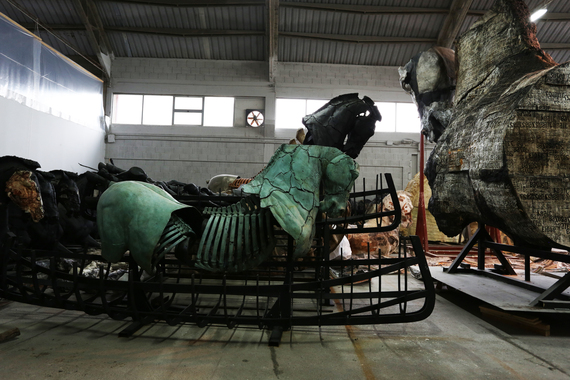 All of the works for Lapidarium were created in Italy. Aceves moved to Pietrasanta, a town in the Tuscan countryside, for its world-renowned marble and bronze foundries. Michelangelo sourced marble from Pietrasanta and ever since, artists from Giambologna and Vasari to Joan Miro and Henry Moore. His sculptural works have been years in the making and are created in multiple materials including marble, bronze, iron and resin.

Acevas commented, “Materials have been an adventure. Most of the pieces were created by working with different foundries, marble laboratories and my private studio. To create just one piece to today it takes a minimum of four years. I wanted to use materials which were relevant to the space. I wanted to mark an evolution in that process, I started the project with wood and antique marbles and different forms of bronze, then switched to using new materials such as white bronze, because they went hand in hand with the symbol of what I want to convey with the Horse “.

Their creator says he was drawn to the domesticated horse as a “symbol of Western culture”, having first arrived on the shores of the Americas with the Spanish conquistadors in 1519. The horses represent fragments from our shared past but also the ever evolving nature of humanity characterised by hope and life, signified by a horse’s heart sometimes visible within the works.

All the horses are different, unique pieces whose common denominator is limited to its size, since they all originate from the Quadriga horses of San Marcos. The horses are also inspired by Leonardo da Vinci’s Gran Cavallo sketch for the unrealized equestrian statue commissioned by the Duke of Milan. References to Greek mythology are also evident most notably with the boat of Charon from Hades’ Underworld and the Trojan Horse. 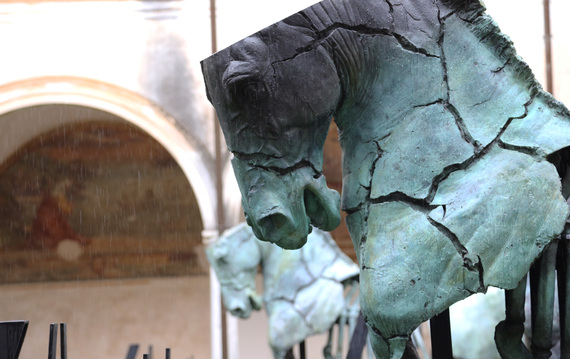 Pop ups or temporary installations have become fashionable in cities such as Berlin and London with Trafalgar Square’s Fourth Plinth. This installation stands in front of one of the most visited and popular monuments in the German capital. Aceves has fully embraced the tradition of public art and has created a dialogue with the space.

Lapidarium takes place within the context of numerous political challenges. Diplomatic relations between Russia and Europe are strained, hence the lack of State Ceremony at the Gate. In addition, the project confronts viewers asking us to consider Germany’s cultural debt to Southern Europe, when Greek debt to Germany remains in the headlines. “Culture can transcend politics. This is an important site for a moment of reflection”, he said. 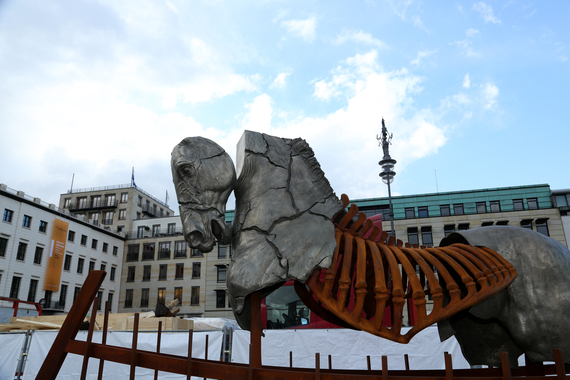 His equine sculptures stand facing the famous four-horse chariot carrying the Goddess of Victory atop the Brandenburg Gate. The site was damaged during World War II and became a symbol of division between East and West Germany. Today the Gate represents reunification and reconciliation. “Without the horses on top of the Brandenburg Gate, this would only be a dialogue with art history,” Aceves said. “Now it’s a dialogue with live history.”

The artist was inspired to name the project after a Latin term Lapidarium which means a place where archaeological items such as stone monuments are exhibited. He intends for the exhibition to travel to other major landmarks around the world between 2015 and 2017, evolving with each time it is exhibited including London. “This is only the first step, there will be more horses in bronze and marble that will be incorporated in every city in which we exhibit to reach over 100 horses that will eventually be in Mexico City”, he said.

The exhibition is organised in collaboration with Kulturprojekte Berlin and Jarmuschek + Partner with the assistance of The Embassy of Mexico, Berlin.

Gustavo Aceves (b. 1957, Mexico City) is a self-taught artist who quickly became an influential painter working in Latin America. His work has been exhibited around the world since the late 1970s including in the Museo del Palacio Bellas Artes in Mexico City, the Venice Biennale and the Beijing Biennale and is part of the permanent collections of Museo Memoria y Tolerancia, Mexico City and the Vatican Museum, Rome. He was one of the youngest artists in Christie’s and Sotheby’s new Latin American sales in New York in the early 1990s.