Alicia Douvall has become the second housemate to be evicted from the ‘Celebrity Big Brother‘ house.

She left the house on Friday night to a mixed reception of both boos and cheers, after facing the public vote against Calum Best, Nadia Sawalha and Perez Hilton.

The crowd once again gave Perez a particularly hostile reception when Emma Willis crossed live to the house, chanting “get Perez out!” – which we’re guessing Katie Hopkins won’t be letting him forget in a hurry. 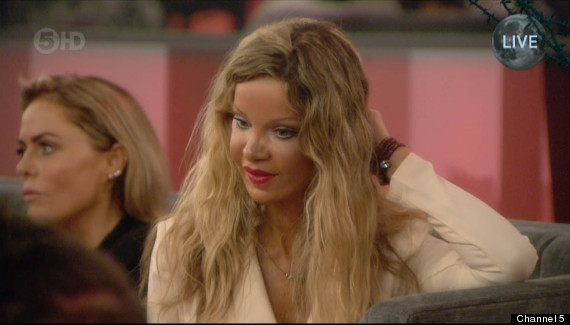 However, it was ultimately Alicia who failed to impress the public and faced the chop, despite bookies naming ‘Loose Women‘ presenter Nadia as their favourite to be leaving.

As you can see below, ‘CBB’ viewers on Twitter were totally fine with the results of the vote, and had barely anything to say about it at all…

This is not okay. Wtf Alicia was evicted? This is horrible it should’ve been Perez or Nadia. pic.twitter.com/bkhr8PPoh7

ARE YOU F’N KIDDING ME. AS MUCH AS I DONT LIKE ALICIA, PEREZ SHOULD HAVE WENT HOME. JUST. UGHHHHHHHHHHHH.

@bbuk should have been Perez

@bbuk @EmmaWillis because it’s a fix. Perez should be out.

HuffPost UK readers had also named Perez as the housemate they’d most like to have seen booted out, with 39% of the overall votes.

Alicia admitted that she was “gutted to be out” – which should come as no surprise to anyone who saw her reaction to being nominated – while she suggested that the reason she wasn’t saved by the public was because she was “up against some really big characters”.

She also opened up about her relationships with some of her fellow housemates, confessing she felt disappointed Katie Price didn’t save her during last week’s nominations twist because she thought they had a “genuine friendship”, and revealed she found some of what Katie Hopkins had to say “disgusting”.

Don’t miss Saturday night’s ‘Celebrity Big Brother’ at 9pm on Channel 5 to find out how the housemates reacted to Alicia’s departure.