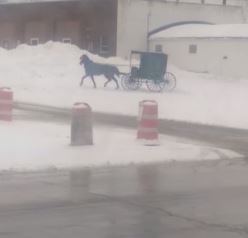 The Amish community might lack the souped-up cars needed to pull off some impressive donuts, but as this video proves – that isn’t stopping them.

In the clip, a horse-drawn carriage used by the Amish community is seen pulling off the kind of trick that you’d usually expect to see in The Fast and the Furious film series, as the animal quickly drags the carriage around in circles.

Although the Amish community might seem a world away from the high-octane world of street racing, it now seems they’ve got one thing in common: Horse power.

It’s not the most impressive Amish stunt we’ve ever seen though. That honour goes to this brave skier.

MORE: Harper Lee will publish To Kill A Mockingbird follow-up this July

MORE: Facebook is no longer the favourite social media site amongst teenagers