7am this morning saw the arrival of ‘Better Call Saul’ with the first episode dropping on Netflix in the UK, hot on the heels of its AMC debut in the US. The second episode will follow tomorrow morning same time, with subsequent shows to arrive every Tuesday.

As the prequel of ‘Breaking Bad’, this show has a lot to live up to. When Bryan Cranston’s Everyman anti-hero Walter White – teacher turned crystal meth-baking kingpin – finally fell on his sword in 2013, there were howls of anguish that we would never again feast on such subtle, richly-layered, viewer-demanding, morally ambiguous television. 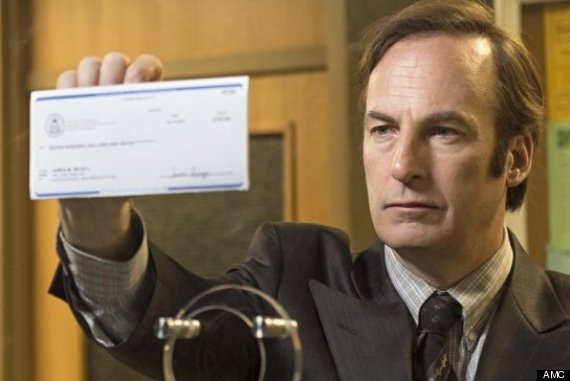 After a suitable wait behind the curtain to check the cries for an encore were more than polite utterings, creators Vince Gilligan and Peter Gould have responded, with a spin-off, set about six years before the ‘Breaking Bad’ timeline.

And now it’s here, with die-hard fans watching intently lest their favourite be somehow diluted, nay spoiled, by what’s come next… or before.

How’s it gone down in the five hours since it appeared here? Well, first word on the block is that ‘Better Call Saul’ is doing everything it needs to do, and with a self-confident, assured, lulling lack of pace and chaos.

Instead of looking at Walter, this show is about his lawyer Saul Goodman (Bob Odenkirk) or, to be more precise, James M McGill, public defender of this parish, before his transformation into the sleek beast of Saul, lawyer on speed-dial to those with light morals but deep pockets. There’s much of the same style, love for minutiae and unhurried exploration of what it means to have big dreams in a small life.

First word from the critics…

“Like all the best comedies, it doesn’t actually make you laugh… it’s hard to put a finger on the precise reasons that such sleazy, down-on-their-luck patter merchants appeal. Do we all yearn to sleep on a fold-out bed in our office wearing last Tuesday’s crumpled clothes? Do we identify, deep down, with freshening up with a drop of filing-cabinet whiskey? Probably not, but then I don’t see why good characters need to be relatable. True art, I’m told, humbles you.”

“There are nods to ‘Breaking Bad’ of course – unusual camera angles (the inside of a mail box), the cameos from other old characters like Mike and Tuco, an offbeat soundtrack, pop culture references and the “cold open” beginning that throws a future storyline into the mix – but there are also hints that Saul can find its own path. .. This first episode felt like creator Vince Gilligan proving that he can shift gears.”

Meanwhile, Rolling Stone asks the question, and then answers it:

“The question, then, is this: Will Jimmy McGill’s long, winding road to “Saul Goodman” — and to the moment that Walter White walks into his office — be worth the trip?

Based on Better Call Saul’s Gilligan-directed pilot episode ‘Uno’, the answer is yes — and despite the show’s pedigree, that was in no way a sure thing.

[First episode] ‘Uno’ earns a favorable verdict by playing to its predecessor’s quieter strengths, not trying to top its loudest ones.”

“Navigating a character in danger of being reduced to conglomeration of quirks — the electromagnetic paranoia, the genial workaholism, the unnamed illness — is a tall order for any actor. What a delight, then, to watch McKean dig the pain out of a pile of weirdo foibles.”

Meanwhile, the AV Club enjoys the humour to be found in the darkest of moments – sound familiar?

“‘Uno’ reacquaints us with a character whose spiel is as slick and sludgy as motor oil, and shows us that his paranoia and misanthropy come from years of being kicked around. He’s desperate to be the one doing the kicking for a change—and lucky for us, there are few things funnier and more pathetic than Bob Odenkirk kicking somebody or something.”

Let us know when you’ve caught up with Saul and his story – as good as what came before (ie after) in ‘Breaking Bad’ or is that too much to ask? Share your thoughts…

The first episode of Breaking Bad spin-off Better Call Saul is now available to watch on Netflix in the UK.