Michael Keaton gives the performance of his life in Birdman, a stunning, surreal, funny, at times savage study of one man’s obsession with a Raymond Carver stage play which he’s adapted, and is directing and starring in on Broadway.

The fact Riggan Thomson once played the eponymous superhero in a series of blockbuster movies, but has since tried to put that behind him, is bound to attract obvious comparisons with Keaton’s Batman; Thomson last played Birdman in 1992, when Keaton donned the bat suit for the final time, a terrific in-joke.

Here he may be surrounded by a terrific supporting cast, including Emma Stone (outstanding), Edward Norton (superb), Naomi Watts and Andrea Riseborough among others, but Keaton steals every scene he’s in, acting as though his life depended on it.

It’s the sort of career-defining performance that fast tracks any thespian for Golden Globe, Bafta or Oscar winning glory.

Most smart movie lovers know some Globes nominations are often dubious at best (Pia Zadora for Best Actress…really?), while the Oscar noms can often be just less original versions of the Globes. 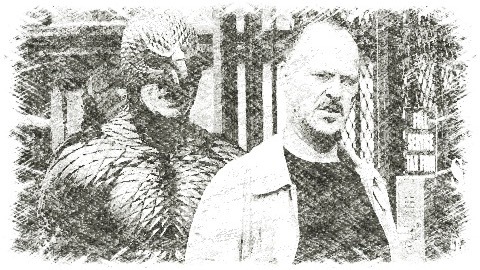 It scarcely matters whether Keaton wins or not. Any viewer with any sense knows he’s been one of the best actors of his generation for decades, whether in a Bat suit; playing Shakespeare in Branagh’s version of Much Ado About Nothing, or propping up Elmore Leonard movies such as Out of Sight and Jackie Brown (playing the same role in both).

Birdman may be reminiscent of Black Swan, addressing the subjects of obsession, depression and the creative impulse, but this is far lighter in its tone. The feathered crime fighter is only glimpsed in a couple of scenes, but is instantly a cult hero, and is bound to inspire his own range of merch.

Aside from sending up cookie-cutter superhero movies, it retains a talon-like grip on the audience for the duration thanks to the clever camerawork which seems like it’s all shot in one continuous take.

Birdman or (The Unexpected Virtue of Ignorance) is brilliantly co-written, produced, and directed by Alejandro González inarratu, the brains behind 21 Grams and Babel among other art house smashes.

Like Riggan in the third act, this flight of fantasy soars. I can only hope the rest of the year’s movies are this good.