Checking Reality at the BBC

I have, on occasions in the past, complained about the Office for National Statistics website, saying that it made it too difficult to find figures. (There is a new one now – it’s better.)

It was only in February that I realised how enormously spoiled we are in finding statistics. It happened when I tried to check a statement made by Michael Gove, who claimed that the proportion of UK trade done with the EU is lower now than it was before the UK joined the EU.

It turns out, 1972 trade statistics are jolly difficult to find. ONS and HMRC were no help. It took me several hours to even find out the publication I needed was called: Annual Statement of the Overseas Trade of the United Kingdom.

I discovered that London’s Guildhall Library had a copy of the relevant edition. The wonderful librarian there called it up from the stacks and then phoned me to say: “Do you realise it’s five volumes?” I went to the library and actually found the statistics I needed near the start of volume four. But then over the weekend it struck me that I needed figures for goods and services, and the figures I had found were only for goods. I needed a separate publication called: Britain’s Invisible Exports. 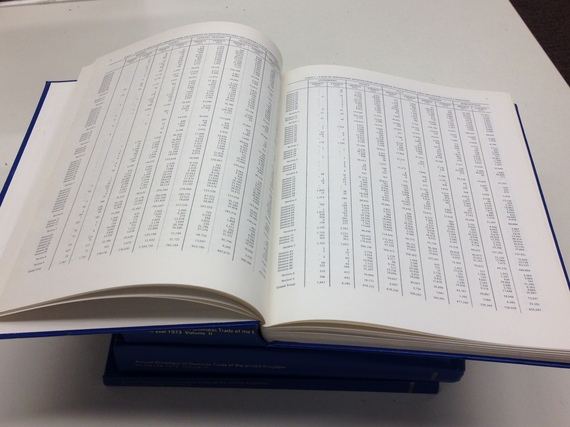 It was at this point that a friendly economic historian at the London School of Economics took pity on me and found the figures I needed on the UN Comtrade database. And I can tell you that the proportion of the UK’s trade with the EU has not fallen since before we joined.

But these are the lengths that the BBC Reality Check team is prepared to go to get to the bottom of a claim on behalf of EU Referendum voters, who are being bombarded with facts and are wondering whether any of them are true and have no way or no time to look into it for themselves.

If you go to bbc.co.uk/RealityCheck you will find some of the occasionally bizarre sounding claims made by both sides of the debate, from Boris Johnson’s suggestion that the EU had tried to insist that Crossrail tunnels had to be 50% bigger and it had taken a year to persuade them otherwise, to David Cameron’s claim that more cars are made in the North East of England than are made in Italy.

Neither claim is accurate, although the cars claim was true until quite recently.

We know this is the sort of analysis our viewers, listeners and readers want from us as a trusted and impartial source of news – they are bombarded daily with facts and really want to know which, if any, are true. We’ve been answering questions for programmes and correspondents as well as going on radio programmes to respond to queries from the audience. It’s not just whether things are true or false – facts without context can be just as misleading, and the Reality Check team has been on the case since the prime minister named the date.

The Reality Check team draws its [news hound/fact finding] talent from across BBC News, based on a core team from Analysis and Research and the Political Research Unit. The BBC’s status as an impartial news organisation put us in an outstanding position to carry out this function. The problem with many of the claims being made is that they are about what would happen in the future under certain circumstances, or what would have happened in the past if different things had happened. We have never been afraid to say that there are some things we cannot confirm or deny – sometimes all we can do is provide context and deliver caveats about predictions and economic forecasts.

We’ve already built up quite a selection of checked claims, which will be very useful when we come to fact-check the live debates later in the campaign. It’s a very long campaign, but there’s no shortage of new facts to check, and the Reality Check team will be with you right up to 23 June.