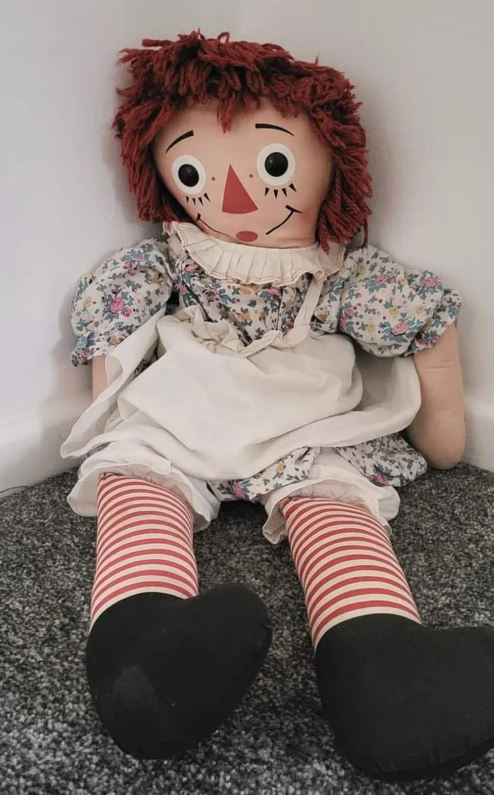 Their claim comes after CCTV footage showed it moving out of its display cabinet.

Lee and Linzi Steer, 37 and 52, who run the Museum of Haunted Objects from their home in Rotherham, South Yorkshire, said they caught the doll on CCTV flipping over their ouija board table in the past.

They believe the doll is the cause of them nearly being in a car crash, and having mysterious illnesses, which once led to Linzi being in hospital for a week, with doctors having no idea what caused it.

In the museum, Linzi has also felt something grab her neck tightly, and has seen things fly across the room with no logical explanation, which the full-time paranormal investigators believe could be because of their doll.

Their doll is an identical copy of a notoriously evil rag doll in the US that inspired The Conjuring and Annabelle horror films, and they think that theirs could have the spirit of the original.

Lee has been fascinated with the paranormal since he was 14, when he saw things being thrown around his bedroom, and since Linzi met Lee on an online dating site in 2016, her interest has grown.

The couple opened the museum in March 2018, after being encouraged by their fans on Facebook, and got married on Halloween in 2019.

Linzi first saw a ghost 25 years ago when she was alone one day at the dressmaker’s where she worked.

She believes she saw a curly-haired woman watching her, who then walked through a closed door.

She said: ‘Even when I saw my first ghost at the dressmaker’s, I felt calm, rather than frightened.

‘I grew up watching all sorts about aliens and ghosts, so I was always interested in the paranormal, rather than frightened by it.

‘But some of Annabelle’s actions scare me.’

The doll was made in the same factory and looks exactly the same as the original doll, which many paranormal believers think is possessed and causes car accidents, and was given to Lee and Linzi in October 2019.

The original Annabelle, which gained notoriety in the 1970s, is now kept in a museum for the occult, as it is claimed that it started to attack people.

When Linzi and Lee’s doll first arrived in the Museum of Haunted Objects, Linzi, and one of her close friends, got a mysterious illness and narrowly avoided two car crashes.

Linzi said: ‘I just became really ill for some reason, I was in hospital for a week, and the doctors to this day still don’t know what was wrong.

‘I got horrendous pains in my stomach and I was being violently sick and they just couldn’t figure out what it was, which was unusual.’

‘One of our good friends became very ill as well, he got abscesses in his mouth and all sorts of things. It was just very bizarre.

‘In the first near car crash a white van nearly went into the side of my car and I had to go off the road. In the other, I was on a roundabout. I’d sort of pulled out and then another car pulled out in front of me.’

On the two-year anniversary of the couple owning the doll, October 24 2021, they think the doll struck again.

Their heavy ouija table was hurled over, which was caught on CCTV – Lee explained: ‘Annabelle was sitting on a chair at our ouija table – it’s very solid and it’s got a metal leg holding it up so there’s no way it should have just fell over or collapsed.

‘One lady put a little speaker on to the table, walked away and the next minute the table just collapsed.

‘There is no logical explanation as to why that should have happened, and it was just the way Annabelle was standing straight at it.’

After this they decided to put Annabelle in a glass cupboard, on a secure hook, to avoid anything dangerous happening again.

But on Halloween night 2022 at about 3am, their CCTV showed Annabelle ‘stepping out of’ the display cabinet legs first.

Linzi explained: ‘She’s in a glass cabinet, and the door is quite stiff, so you’d literally have to pull it open.

‘She shouldn’t have fallen legs first because her head is heavier than her legs.

‘It looks as though she’s sort of twisting her legs to come out first, stepping out, it wasn’t a natural way to fall. It was very, very bizarre.’

She continued: ‘We’ve got some cap balls, which basically flash if somebody touches them, and all of a sudden they just come flying down the steps. And it’s just bizarre.

‘It’s like the last two weeks, since Annabelle stepped out of the cupboard, the museum is getting more and more dangerous and things are getting physical.

‘We’re used to dealing with this kind of thing, however, it is getting more and more intense – it’s building up energy, big time.

‘When I was filming a reel the other day, something literally grabbed the back of my neck out of nowhere and squeezed it quite tightly. It wasn’t painful, but I didn’t want to be in that room. And it did make me think.

‘So, something major is going to happen, but she’s not scaring us.

‘There’s a theory that if you’re scared and the spirit can feel it, it can be worse for you.’

The couple are keeping Annabelle in the museum for now, but say if things start getting violent, they will consider getting help from a demonologist.


MORE : Who ya gonna call? Ashley Roberts says she was raised in creepy, haunted home