'EastEnders' Spoiler: Dot Cotton To Stand Trial For Murder Of Her Own Son, Nick Cotton, During 30th Anniversary Live Week?

‘EastEnders‘ is to crank up the drama later this year, with reports claiming that Dot Cotton is to be arrested for the murder of her own son, Nick, according to reports.

The Mirror have claimed that the jaw-dropping storyline will play a major part in the soap’s week-long live episodes, scheduled to air next month as part of the 30th anniversary of the first episode of ‘EastEnders’.

Dot is to be arrested and charged with murder, which will follow years of emotional turmoil at his hands – though a source has warned fans of the show that they should expect the unexpected. 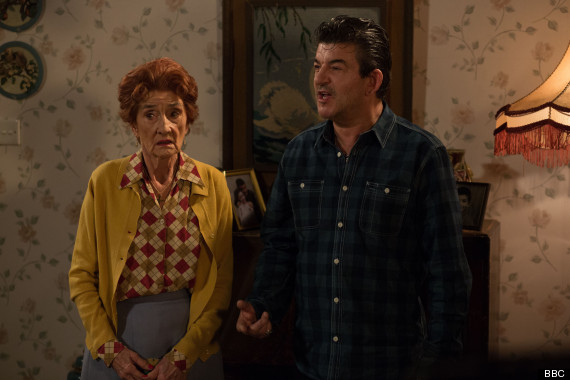 A soap insider told the newspaper: “The prospect of widowed pensioner Dot facing trial and being put behind bars for killing her own son is a huge storyline.

“Producers have been plotting this storyline for over a year – ever since John Altman [who plays Nick] returned.

“’EastEnders’ has enjoyed a massive resurgence in recent months, and producers are convinced this murder plot involving Dot will help them keep ahead in the ratings’ battle with ‘Coronation Street’.”

It was previously confirmed that, after massive speculation spread out over almost a year, Lucy Beale’s murderer will finally be revealed during the anniversary celebrations.

Some familiar faces are also scheduled to return for the special episodes, including Barbara Windsor, who will be reprising her role as Peggy Mitchell.

It has also been reported that bosses are hoping Ross Kemp might return to play her son, Grant Mitchell, in honour of the show’s anniversary.