‘EastEnders’ bosses have revealed more details of the upcoming live episode, which will be screened in February to celebrate the soap’s 30th anniversary.

During the special episode, Ian Beale will marry his ex-wife Jane – will it be fifth time lucky for the unlucky-in-love businessman? 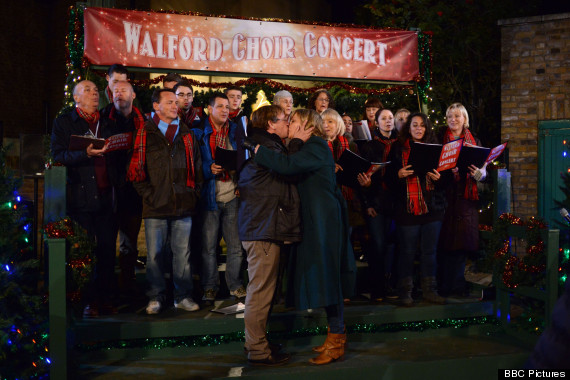 Ian and Jane got engaged in Christmas Eve

The former couple have rekindled their romance in recent weeks, and Jane popped the question on Christmas Eve.

Jane and Ian first married in 2007, however things didn’t exactly go to plan and they’ll walk up the aisle for a second time on Thursday 19 February.

The anniversary week is set to a busy time for the residents of Walford, and Lucy Beale’s killer will also be unmasked.

Bosses recently announced a special competition, which gives viewers the chance to win a VIP tour of the Elstree set, if they can figure out whodunnit.

Barbara Windsor will return during live week, reprising her role as Peggy Mitchell, following the huge success of her surprise return for one scene earlier this year.