Eurovision Song Contest: How Political IS It, And Does It Matter? Blue Say It Went Against Them

Blue are the latest pundits to express their concern at the amount of politics that always threaten to govern the Eurovision Song Contest.

The band represented the UK in 2011 and would have come fifth if it had been determined by public vote but, because of the 50/50 split with jury vote, ended up coming 11th.

Singer Duncan James says, “There’s a lot of politics involved, unfortunately. You get certain countries voting for their neighbouring countries… so it is more of a political contest, unfortunately, rather than voting on the song.” 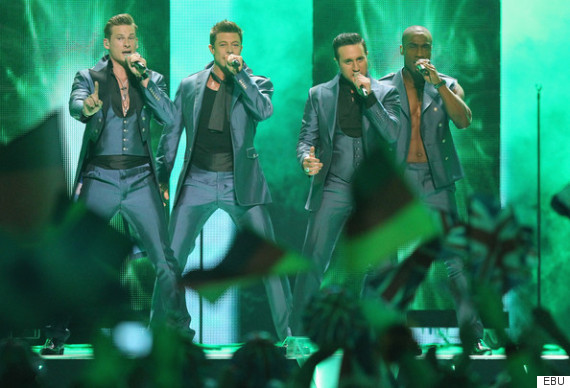 Blue were the UK’s act for 2011, but the jury vote went against them

But how political is the contest, and should this be rectified? The European Broadcasting Union, who oversee the event, make a clear in their rules that “no lyrics, speeches, gestures of a political or similar nature shall be permitted”. However, as Dr Karen Fricker points out, the definition of what counts as political is very much open to interpretation, and possibly at the mercy of the EBU’s discretion.

She explains, “What can be perceived as direct comment on a political leader, Georgia’s ‘We Don’t Wanna Put In’ in perceived reference to Putin, was not acceptable a few years ago. But comment on Euroscepticism (Montenegro’s “Euro Neuro’ in 2012) was allowed. A lesbian kiss was allowed, in the 2013 Finnish act. Conchita Wurst using her winning year to campaign for tolerance and acceptance was been allowed.

“It would appear that the EBU has a selective definition of ‘political’, and when acts are forwarding a politically progressive agenda that dovetails with its own mandate and values, this is acceptable.” 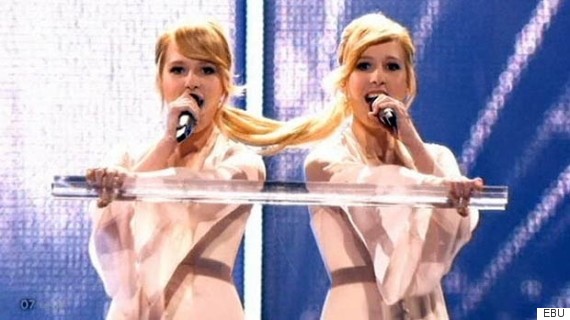 Russia’s entry for 2014, the Tolmachevy Sisters, were booed in the arena and became very upset

For Karen, part of the beauty of the contest lies in this tension between the rules of non-political participation, and what the artists come up to get round them.

“Of course, national entries are sometimes going to use this platform to make statements about issues of national, ethnic, linguistic, cultural, or gendered concern. Why wouldn’t they?” she says. “Thanks to the rules, though, these statements can’t be in your face; there has to be a Trojan Horse element. So for me, part of the power and the fun of the contest is to ask ‘What are they really saying? What does that tell us about where their culture is at, at this particular point?’ Spectators become sleuths, decoding the signs.”

Fortunately for sleuth Karen and other academics who increasingly see the Contest as a way of decoding recent European history, there’s plenty to chew on this year. Armenia, marking the 100th anniversary of the country’s genocide, originally entered a song called ‘Don’t Deny’, which was jumped on by the EBU. Karen chuckles, reporting that “It’s now the slightly less direct ‘Face the Shadow’, but the lyric ‘Don’t Deny’ is still figured repeatedly.”

Meanwhile, Russia – who last year sent a pair of teenage twins who wept when they were booed in the hall – continues to raise questions.

“Was it fair to be subjecting these young artists to this kind of negative response when they are artists representing their country, not politicians who make policies and engage in national and international relations?” ponders Karen.

“Arguably, those boos were not for the twins but for Vladimir Putin and the anti-gay laws and acts of international aggression which were very much at the top of the news agenda that year. 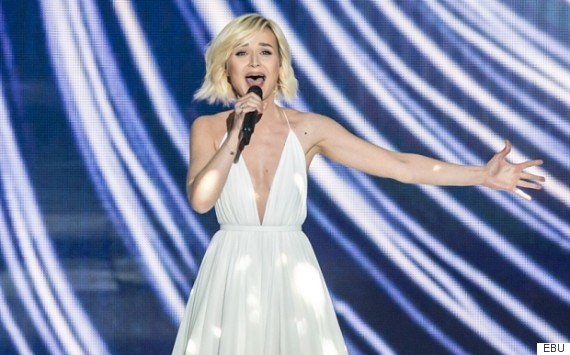 This year’s Russian entry is Polina Gagarina – but will she be booed because of Putin?

“This year, Ukraine is not competing in Eurovision, because of the ongoing conflict with Russia, and there is an expectation that the Russian act – the lyrics of which are all about a sort of ‘let’s all get along in peace in harmony’ message – will also get booed. This may sound harsh, but my view is that this is a major international platform for performance, and politics are part of this.

“Artists need to be prepared for responses that are not necessarily about them, their talents, and their song, but about the country they’re representing. You would hope that each country would send professionals who have the chops to face up to these realities.

“Regarding the Russian entry this year, this is only getting more intriguing as the rehearsals have started up in Vienna, because many fan/journalists writing for the Eurovision community sites are saying that the act is brilliantly staged and that she’s an excellent, professional singer. Someone posted on Facebook after Russia’s first rehearsal that they think we’ll be in Sochi next year.”

… An outcome which, if it happens, will ensure that the politics around this deceptively lightweight singing competition aren’t in danger of going away any time soon.

This year’s Eurovision Song Contest semi-final is on BBC3 tonight, with the final being broadcast on Saturday evening at 8pm on BBC1.