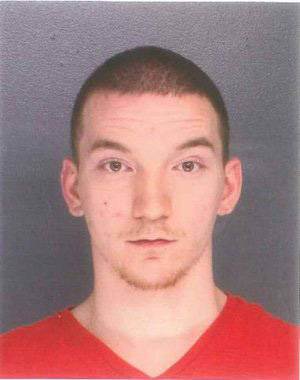 A man who is alleged to have grabbed a restaurant worker’s breast at a drive-thru admitted to the act and said he was a ‘ladies’ man’, according to police.

Michael Jenkins, 23, allegedly strolled up to the drive-thru window at a McDonald’s with a friend at around 12.30 this morning and told the 31-year-old employee that he would ‘show her a good time’, Upper Dary Police Superintendent Michael Chitwood said.

But when the worker declined the offer, Jenkins is said to have reached through the window and grabbed her breast.

‘She pooh-poohs him off and he grabs her breast through the window,’ Chitwood told Philly.com.

But when police caught up with Chitwood at a nearby bar, Jenkins appeared to be proud of his alleged actions.

‘He says, “Yeah, I’m a ladies’ man and that girl over there wants me,”‘ Chitwood recalled.

‘That’s how much she wanted him – she got him locked up.’

The victim was brought to the bar, where she identified Jenkins as her attacker.

The 23-year-old was charged with disorderly conduct, indecent assault, public drunknness and other related offences.