Ghost pushes antiques off shelf in Britain’s most haunted shop 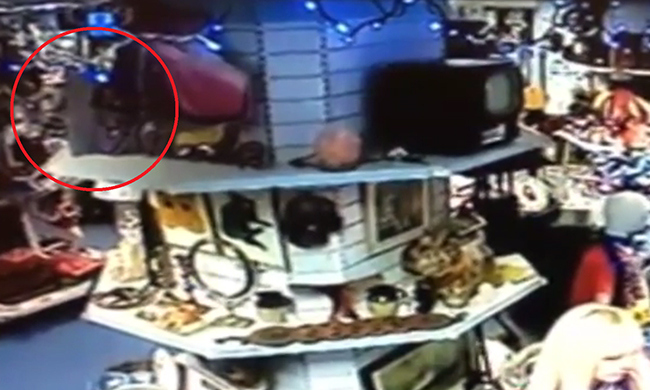 At an antiques shop you expect to find items that have a back story you will never know.

But some items just don’t like being left on the shelf as this video shows.

The owners of Barnsley Antiques centre believe their shop is being plagued by a poltergeist and they have CCTV evidence to prove it.

Danny Parker and Rachel Archer’s grainy film depicts the moment a framed picture of a skull fell from a shelf while a medium was in the shop investigating previous ghostly goings on.

In September last year, the antique enthusiasts were ‘shocked and scared’ after reviewing similar CCTV footage that showed the glass door of a large display cabinet opening in an empty room before exploding into little pieces.

Unsurprisingly, the incident attracted interest from paranormal investigators and mediums keen to get to the bottom of the poltergeist problem.

Yet more unexplained incidents were later uncovered – including a mysterious mist gushing from the floor (ghost) and a hovering white orb (also ghost) – sparking claims Barnsley Antiques Centre is the most haunted shop in Britain.

Speaking of the latest incident Parker told The Mirror: ‘A gent came in to sell us some things and he also asked about our hauntings.

‘He explained his wife was a medium and he had some senses as well. I showed him photos of the ghostly faces I had on my phone caught from CCTV footage the split second a cabinet exploded.

‘We were then stood talking when suddenly from behind us a picture fell from the top shelf. On inspection the picture was of a skull, which looked very similar to the photos I had just showed him.’

He added: ‘The picture had been on the top shelf since the beginning of November as it was bought for Halloween, so it hadn’t been moved for around two months.’

As we all already know, there’s only one logical conclusion here, ghosts are to blame.