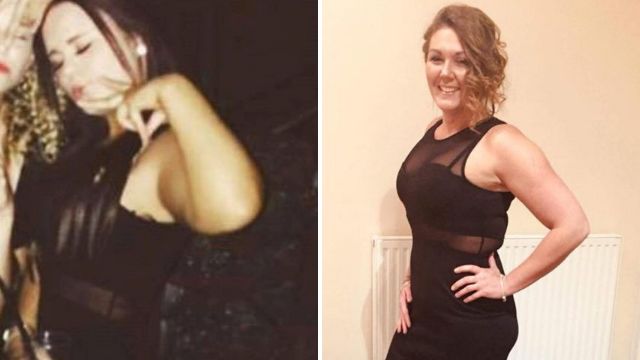 But Lillie Haines, 21, got a little more than she bargained for while having a snoop through the pictures of the mum of Sam, a boy she had a fling with.

The carer was shocked to see Caroline Eastwood had posted pictures of herself posing in the size 12 H&M black dress – which Lillie left in Sam’s bedroom.

Lillie posted her discovery on Facebook, with the caption: ‘Shagged someone and left my dress round theirs, now their mums started wearing it on nights out, confused.’

Caroline soon caught wind and replied: ‘Oops that was me!! Jealousy is an ugly trait! Get over it girls I am impressed I can wear a 19/20 yr old dress and look so much better in it!!

‘Imagine admitting on Facebook that you’re a slag and just leave your clothes round a bloke’s house. Don’t worry sweetheart, I put it on a hot wash first.

Lillie replied: ‘How’s that jealousy. Imagine wearing something your son shagged in tho.’

And when she said she didn’t want the dress back, Caroline told her: ‘Well stop going on about it then you silly little b**ch.’

Lillie, from Hampshire, said she found it all ‘hilarious’ and ‘just can’t get her head round it’.

She added: ‘It’s ridiculous her calling me a slag. She’s wearing the dress of a girl her son has slept with.

‘It’s like a boy coming round mine and me giving my dad his clothes.

‘She was saying sarcastically that she’d put it in the wash and give it back but I really don’t want that back. She has stretched it I think.

‘She’ll probably keep it even after all of this. It wouldn’t surprise me if she puts up a photo over the weekend or whenever she next wears it.’

Caroline attempted to justify her wearing the dress and said she assumed it was a friend’s after finding it in her washing basket.

She said: ‘Anyway lets get down to the nitty gritty. This was a year and a half ago, I genuinely thought it was my friends dress that she had left here and EVERYONE has moved on. THE END!!”

But Lillie’s pal Paige Emery retorted: ‘That was a beautiful bedtime story. Needs more dragons tho.’

Some of you may be wondering what Lillie went home in after her and Sam’s night of passion.

She said she wore his joggers and dressing gown – and still has them to this day.