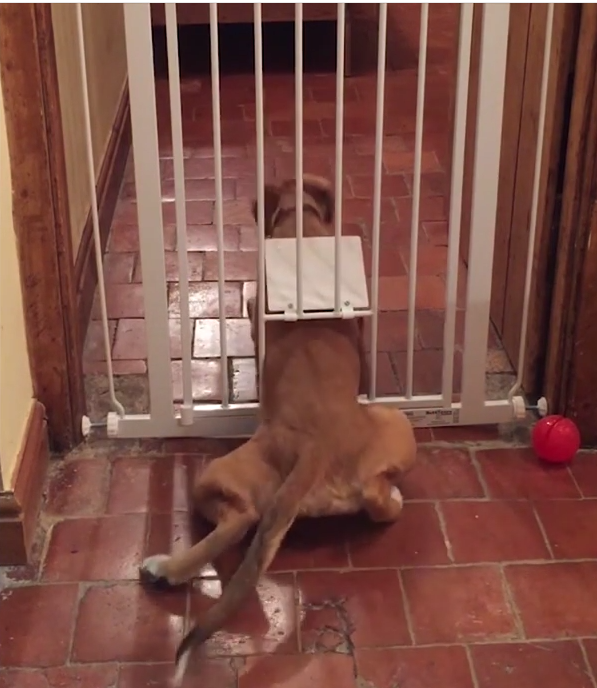 A family set up a camera to try and figure out how their dog kept escaping the kitchen recently, and only upon viewing the footage did they realise their pet had quite an unusual talent.

It turns out five-month-old Dash is something is an amateur contortionist, after he was seen squeezing his body through a tiny cap-flap, much to the amazement of owners Paul Groves and Nicky Gilligan.

The greyhound lurcher is 2 foot tall, however he manages to fit through the tiny gap, which is measured at just 7 x 9 inches, in his home on Newport, Wales.

Paul said: ‘We have two cats and one of them can barely squeeze through it, so it’s amazing that Dash can.

MORE: Workers beat up and film an ‘alien’, only to realise it was a malnourished bear

‘Dash is a beautiful dog and he has a really good temperament. He’s playful and we’re delighted we have him.

‘He likes to run around like mad for ten minutes and then sleeps the rest of the time.

‘He is still growing though so eventually I don’t think he will be able to fit through the hole which might make life a bit easier.’

After uploading the video of Dash to Facebook it instantly went viral, and now Paul and Nicky have considered setting up a ‘Dash cam’ so they can share their dog’s antics with the world on a regular basis.

MORE: The dog abandoned at a train station with a suitcase has found a new home

MORE: Dog can’t find a new home because she has different coloured eyes