How to win rock-paper-scissors every time 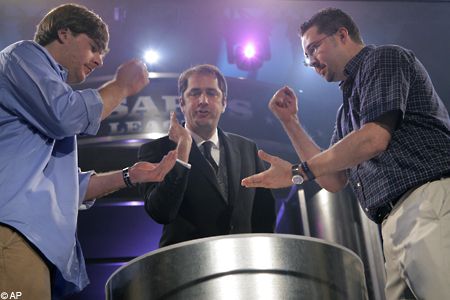 So, fancy yourself a world class rock-paper-scissors player do you?

Well you ain’t seen nothing yet.

Check out these sure-fire RPS techniques that’ll reduce your opponent to rubble.

1. If they throw the same move twice, do this…

If you’ve had a couple of hefty rocks thrown your way, expect no more any time soon.

Humans are terrible at being random and will unconsciously avoid things we see as patterns, according to a study by computer scientists at Zhejiang University in China.

So you can pretty much guarantee that no-one’s going to crank out three rocks, for example. If your opponent’s thrown two rocks, make your next move paper or scissors, and you have a higher chance of winning or drawing.

2. Men will throw a rock on their first go

They’re more likely to do this because, let’s be honest, it’s the manliest of moves.

A survey of 60 people by Prezi showed more than half of all men went for rock first time, and it was by far the most common move thereafter.

If you’ve just won with scissors then you’re more likely to use scissors in the next round.

But if you’ve just lost with them, you’re more likely to immediately change weapon.

According to 2011 British study, we like to copy each other.

Psychologists worked with 4,050 people for a number of RPS trials. In some, participants were blindfolded – and they tied exactly one third of the time.

Then only one player was blindfolded. Those who could not see won the majority of games, not by a great margin, but it’s got to count for something.

MORE: This is how you ‘always win at rock-paper-scissors’

MORE: Robot beats you at Rock, Paper, Scissors 100 per cent of the time

MORE: Rock, paper, scissor championships are not for the faint handed