Impoverished Housing in Focus in Photography Exhibition at Science Museum 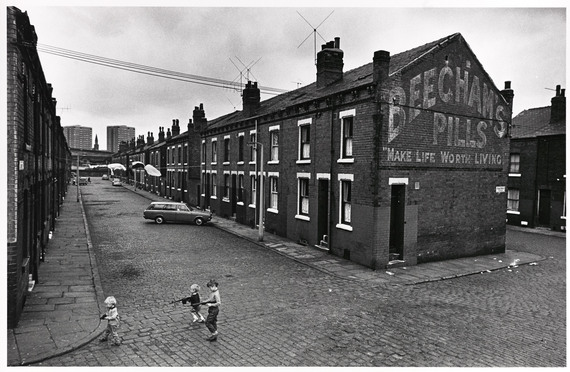 Make Life Worth Living is a collection of photographs at the Science Museum taken by Nick Hedges between 1968 and 1972 of the impoverished urban housing conditions that many Britons lived in.

The project was initially commissioned by the housing charity SHELTER, who wanted to document the living conditions in poor quality housing across the UK in a bid to raise awareness about the extent of the squalor and poverty that many lived in, and the profound human cost of that existence.

Exhibited for the first time, following a 40 year restriction to protect the anonymity of the subjects, one hundred black and white photographs are displayed alongside edited texts from Hedges’ detailed written notes of his travels and encounters.

As you can imagine, most of these photos are quite harrowing. The grim housing blocks, the damp, squalid rooms, the complete absence of heat, light and many other things most of us take for granted is depressing and incredibly humbling.

Yet there is no sentimentality in these images. Some of them reflect moments of bonding, love and happiness despite the conditions. Whilst in others, the impact of trying to just survive in impossible conditions is etched across the faces.

As Nick Hedges commented, “The thing about people living in slum housing is that there is no drama… It’s about the absolute wearing down of people’s morale in a quiet and undemonstrative way.” 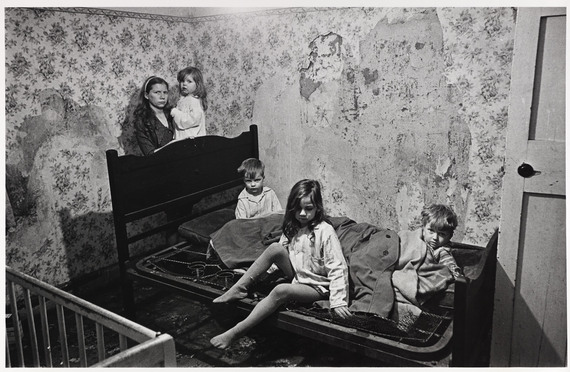 And this is a key point, that it’s not just that people lived like this, which is bad enough, but the knock on effects this had on every part of their life, and the lives of those who depended on them. Our opportunities in life are limited by our circumstance. And the worse the circumstance, the worse the opportunities.

Nick Hedges visited many cities in this four year project including Liverpool, London, Glasgow, Birmingham and Manchester. The sad truth is that, with the odd exception of a steel factory in the background or a Welsh valley, there’s little in these photos to distinguish one city from another – they’re all the same.

And this has been communicated really well in the curation of this display. The temptation could have been to group the photos by location but instead the photos are intermingled – a shot from Toxteth 1969 is shown alongside one from Vauxhall 1970, which is next to a photo from Bradford 1969.

The effect is profound and reinforces the message that all cities were the same and that each hid a dark underbelly. 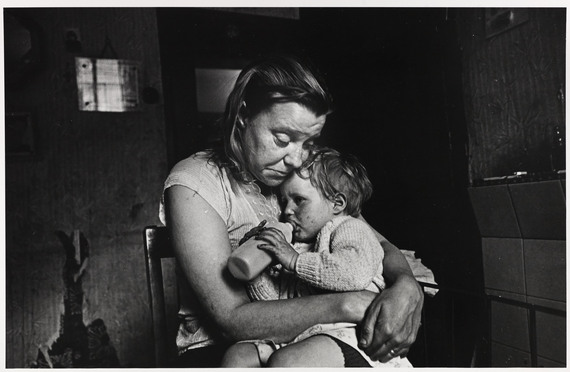 The addition of Nick Hedges’ notes brings real depth and added context to the shots, such as an explanation for the skin infection covering a young girl’s face in one photo – an infection caused by sewage seeping above ground into the courtyard outside her home. Or the single mother of six who took sleeping pills every night to shut herself off from the squalor of living with no gas, electricity or hot water.

One of the fears I had on my way to this exhibition was that this display might be a rather sorrowful reflection on our recent past but with little to say about our present. However that fear proved to be, sadly, misplaced.

As SHELTER emphasise in the exhibition, today, every 11 minutes a family in Britain loses their home. That’s frightening. But these families often become invisible to authorities as they find their way by squeezing into friends’ spare rooms, making do on a spare sofa or becoming just another number in overcrowded emergency hostels.

Desperate housing conditions exist today in the UK and the most unsettling part of this display was that if it weren’t for the cards alongside each of the photos, you could be forgiven for believing some had been taken today. There is something unsettlingly contemporary about this display which makes it very necessary.

2. Mr and Mrs M and their four children lived in a council owned house in Vincent Crescent, Balsall Heath. Apart from the poor state of the property – no bathroom, no hot water, outside lavatory, inside walls running with damp – these children were sleeping in the middle of winter, on two sodden seat cushions covered by a couple of old ‘macs’, there was no heating in the room, the snow lay thick outside and the windows were broken. Birmingham, January 1969 © Nick Hedges / National Media Museum, Bradford

3. Mrs T and her family of 5 lived in a decaying terraced house owned by a steelworks. She had no gas, no electricity, no hot water, no bathroom. Her cooking was done on the fire in the living room. Sheffield, May 1969 © Nick Hedges / National Media Museum, Bradford