Kim Kardashian (And Her Bum) Appear In New NSFW Prada Photo-Shoot, Will She 'Break The Internet' This Time? (PICS)

Usually when you’re modelling a clothing brand you actually wear clothes… but then Kim Kardashian has never been one to do things the traditional way, has she?

That’s why, rather than actually modelling some clothes in her new black-and-white photo-shoot with Prada, Kim has decided to throw on a jacket and some heels, and call that a day.

Kim’s famous internet-breaking bum is on display (again), while puffing on a cigarette and throwing a glance behind her to the camera. 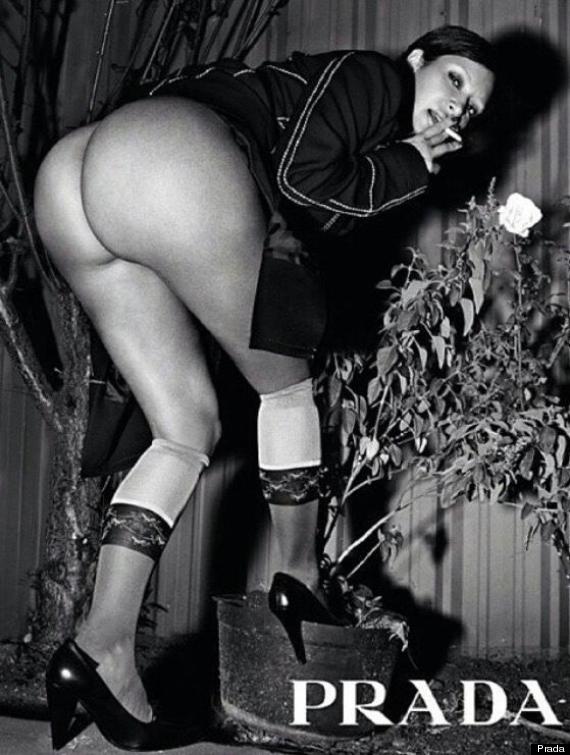 The new picture has been doing the rounds online for a couple of days now, and while no one was exactly certain where her new bum-baring photo had emerged from, it’s now come to light it’s part of a new Prada campaign.

Kim is becoming something of a dab hand at posing in posterior-based photography, after her notorious ‘Break The Internet’ Paper cover shoot was shared online all over the world last year.

The infamous cover photograph, that showed her showing her well-oiled bum while stepping out of a glitzy dress, was followed a day later by a full-frontal naked photo-shoot.

However, while the tagline for the photo-shoot was ‘Break The Internet’, it later transpired that photos of Justin Bieber posing in his underwear for Calvin Klein had received even more attention online than hers.