Once again finding myself amid the hurly-burly of the confluence of fairs at Montpellier, Avignon and Beziers, I was encouraged to observe how current tastes and fashion intersect with the antiques world. These fairs take place four times a year and whilst some traders take stands at all three, the number of dealers you see nonetheless amounts to over 2000. If ever there was a barometer of the trade and current trends it is here.

It began badly in driving rain. The Languedoc in southern France is one of the most popular holiday destinations because the weather is so marvellous. Arriving from almost anywhere in cold northern Europe, after a couple of claustrophobic hours held at the mercy of one of the discount flight operators you can slip out of your thermals into shorts and t-shirts – and bathe in warm Provencal colours and red wine to match. Dealers come to buy but also to have a little holiday. Though the trading day begins at 8 it is all over by midday at the latest, so the remains of the day and the night are there to be sybaritically consumed. The dealers come in two flavours – specialists and generalists. The former steam round covering the miles of stalls: eagle-eyed they pounce and move on. Often they have finished by 9 or 9.30. The others have to cover anything and everything; therefore they need to proceed at a thorough and gentle pace. Without fail the specialists end their trawl full of complaints, they have missed something or they have been asked too much money. Such is their pain. The others have their own problems. The fair opens to one and all at 8am – the dealers as well as the buyers. This means that not everything is unpacked from the vans as you enter. You need to go slowly and you need to go round each pavilion several times. Inevitably the generalist also moans about missed chances but it happens later in the day. So I am lucky to enjoy the full range of emotions, since I am travelling with two diehard carpet dealers, and keep bumping into an enthusiastic general dealer from Pimlico. Beziers was awash and after 10 minutes I gave up and repaired to my car to attempt to dry out, having bought nothing, barely able to see what was on offer through the downpour. The carpet guys are really called Owen and Michael but they are known to each other and their friends as Lucky (Mike) and (Owen) the Pirate. Later, drenched, they tell me reluctantly that they had to reject a rug because it was impossible to lift it out of the rain and mud. My other friend Christopher – is soaking, but I see him scuttling backwards and forwards from his hire car with an array of eclectic oddities. Despite the deluge, or maybe even because of it, his buying is thriving.

Giving up we head to Avignon and finer weather. En route we have an extended luncheon detour to the fabulously named Palavas-les-Flots. Overlooking the beach, beyond which- kite surfers strut their stuff in the gales; L’Escale offered us elegantly presented sweet Bouzigues oysters and a grilled fish called a Maigre, very like sea-bass. Then Avignon – a town that is one of the great Medieval walled towns and home to one of the most charming hotels. The courtyard with its ancient and beautifully manicured plane tree is worth staying for alone, but the Hotel de L’Europe is beautiful in every corner. Even my Kir was exceptional – a pale aromatic blush. Supper at a restaurant of only six tables called L’Estaminet, where we washed down a perfect soft and flavoursome Salade de Gesiers followed by a superb gigot d’agneau with the divine local Rasteau, which worked perfectly. 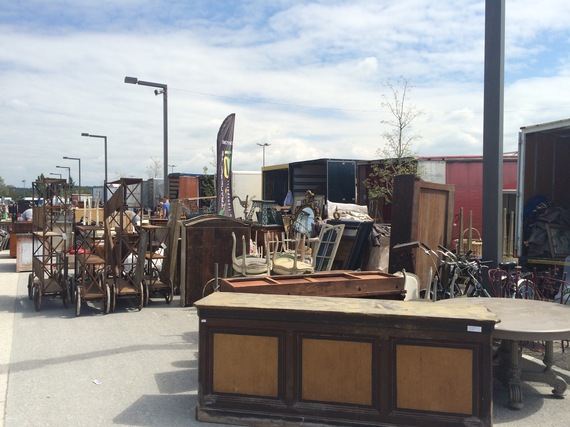 Back to work and Avignon was catch-up time for most people who had struck out because of the rain. The shippers who are corralled in one of the pavilions worked away feverishly gathering and packing endless piles of purchases. My friend at Hedleys Humpers said that though the fair finished at midday they were still packing at 8.30pm. 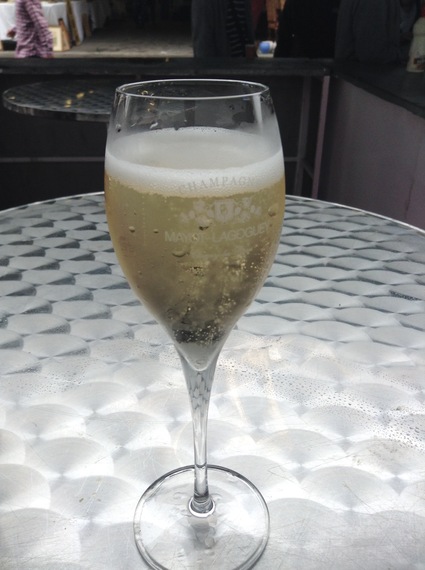 The final morning is Montpellier and this is where the champagne bar is. It is just a small white tent serving delicious bright and mineral rich Mayot-Lagoguey, but this is where at the end of the three-day marathon people come to reflect and philosophise. Now we will hear how fashion and the antique world collide and how happy that collision is. The shippers tell their own story with fevered packing and destinations marked for all the corners of the planet. My friends however – Lucky and the Pirate – complain that they have bought too little and paid too much. They bemoan the lack of new opportunities and new dealers. Christopher has bought well but that does not stop him reflecting on the lack of traffic to his shop in Pimlico. 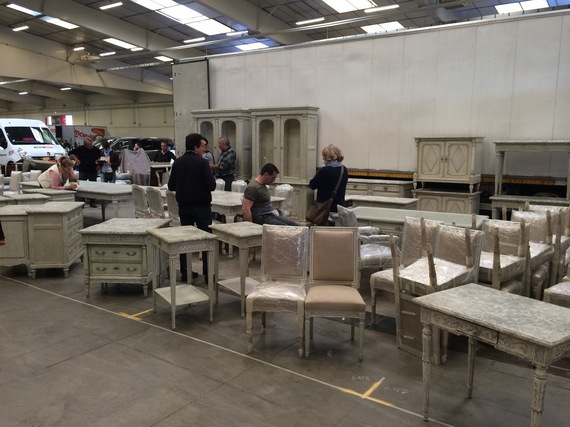 As the mood mellows so one topic of conversation begins to percolate to the top. The question on everyone’s lips is: where does the taste for spurious white furniture – the so-called “shabby chic” – come from and when will it end? It affects everyone – not one aspect of interior decoration can survive untouched in the light of its glare. Carpets must be bland and washed out, objects from lamps to candlesticks must be without ornament or strong pattern or colour. Not everyone adheres to these rules, but the power of the aesthetic is formidable. Several very large stands at all the shows are dedicated to miles of decoratively destroyed painted furniture, and elsewhere, throughout the acres of old stuff, the spuriously and speciously damaged virtually new things proliferate with clear commercial success. Contemporary art needs space and the blandness of this style is gently respectful of the more serious art. There are other theories and probably genuine explanations but the world that lives and breathes through the public’s enthusiasm for the old, the beautiful and the original craves a return to the appreciation of the real and period object. The fashion is still very strong and the market is there to both feed and consume. It seems that what is fashionable is almost a different market. Perhaps purveyors of the old school can hope for a burgeoning realisation that the truly original is actually something made to a good standard and that is both an echo of and a message from a specific time and place. In the end the pastiche might not seem so special and so innocent. Over a final parting glass of champagne we toast the fanciful dream that fashion will once more favour the antique.