Madame Butterfly: The Czechs and Balances Of a Night at the Opera

The acoustics are perfect, the musicians hidden in the pit, the conductor coaxing sound from the players which shoots up to caress the ceiling before it is forced back towards the rear of the auditorium, wherein we sit, the sound washing around us for two and a half hours. 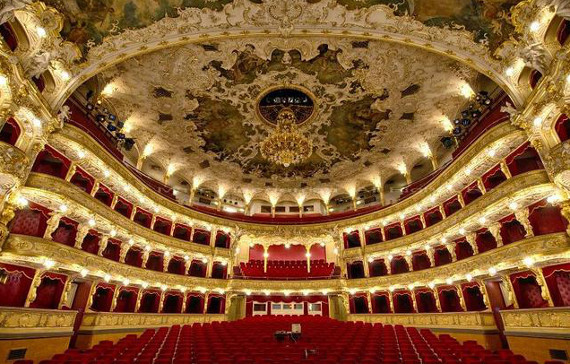 It is here in a box that we watch Puccini’s Madame Butterfly play out beneath the proscenium arch and wonder at how tickets as cheap as these could afford an experience so priceless.

Art costs wherever you go, yes, but a box costing £40 (CZK1,370) here in Prague at the State Opera House to watch Madame Butterfly compared to a ticket which costs roughly four times as much at Covent Garden’s opera citadel here in London, has one asking the question: why the disparity in price?

But explaining such disparity is no easy task. If quality is the guiding tenet, then this reviewer was not able to discern any marked difference between the quality of operatic experience he last enjoyed in London (La Boheme, some nine years ago) and this one. Perhaps, and alas, the difference is the level of hype, or advertising employed. At any rate, the story of Cio-Cio San, staged in the heart of Bohemia – the fulcrum on which the whole of Europe once turned and balanced – was a salutary reminder of how accessible art should be.

Madame Butterfly – the story of the unhappy love of geisha Cio-Cio San (played by Jitka Burgetová) for the American, Pinkerton (Tomáš Černý) – evolves from the meeting of two cultures.

But the clash that is more keenly felt, post performance, is that of the High (affordable) culture of a central European opera house with Low (and readily accessible) culture, say, of the cinematic variety. It is often wrongly assumed that opera is an elevated art form put on for an elite, but in Prague that is clearly untrue. In Prague, the social check and balance is inherent in the music, which is affordable and available to everyone, should they desire it.

The Czech capital is a time capsule with a core of unaltered architectural structures, free of advertisers’ hoardings, the city where Einstein strolled, Kafka wrote and where Mozart premiered Don Giovanni at the Estates Theatre in 1787. Prague serves as a place from where one can look back and ponder just what has happened to Europe’s cultural wealth since the dawn of the TV age.

Somewhere within the mist and snow that enshrouds the stone figures of Charles Bridge and which makes the surface of the coursing Vltava river crackle beneath it lies the answer to the question posed to the tourist by the city itself.

And it’s a cultural question. Prague or Praha means ‘threshold’, the place or point of beginning, and it would appear that the visitor to the city finds himself beginning to learn again about his own cultural wealth, that of his own European continent.

Across the river in Prague’s Holesovice district lies DOX, the Centre for Contemporary Art, and on the way to the gallery, writ large upon a wall in red (pictured), the art seeker is asked: “Art, is a waste of time?” It’s an absurdist question in a city so brimming with art that it seems to overflow with it. But you smile at the joke nonetheless.

To paraphrase Kafka, “this dear little mother has sharp claws”, but you can never let go of her, not when Prague consistently delights one’s heart and mind. Especially when the beer’s so cheap, too.

The Czech Republic, like all other countries in mainland Europe, is a treasure trove of literature and art, the consumption of which by children and adults alike has kept the populace primed to accept, perhaps even hunger for cultural pursuits.

Prague itself is comprised of the very old and the very new, managing through this combination to prick the senses, calling one’s attention to the need for a city to hold fast to its past while forging ahead into the future, lest it lose its present-day character forever. Those quick to remake London’s Soho should take note.

It’s a city where going to the opera or to the local ale house are, comparatively, as affordable as each other. And that’s something a city like our own would do well to emulate when we, as Londoners, diligently save our well-earned coins to enjoy a rich, full cultural life.