Madonna has been the first act confirmed to be performing at the Grammys on 8 February.

The pop icon, who will release her 13th studio album ‘Rebel Heart’ in March, is thought to be giving the debut performance of her new single ‘Living For Love’ at the awards ceremony, after her manager confirmed to Billboard that she would be taking to the stage.

True to form, Madonna couldn’t resist putting some bewildering photos up on her Instagram page to mark the occasion, including one of a Grammy award wrapped in cables, mirroring her new album cover.

Madonna had previously hinted to Billboard that she would be putting in an appearance, saying it “would be wonderful” to perform the new album’s lead single at the Grammys, adding: “That’s possibly something that’s gonna happen.”

She performed a portion of ‘Open Your Heart’ at the ceremony last year, taking to the stage with Macklemore and Mary Lambert while they sang ‘Same Love’, while a host of same-sex couples had their marriage officiated by Queen Latifah. 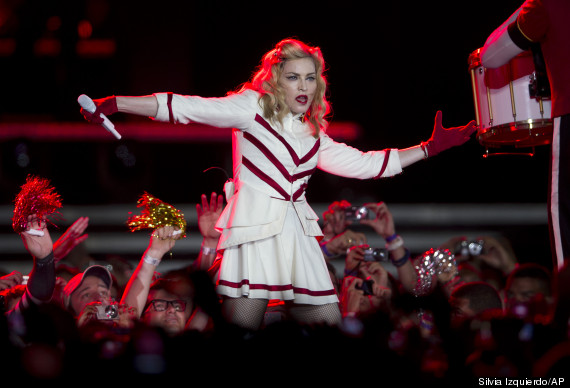 Madonna on her MDNA tour

Six tracks from ‘Rebel Heart’ were given an impromptu iTunes release last month, after over a dozen demos of songs she’d been working on for the album were leaked online.

However, Madonna later landed herself in hot water and even faced accusations of racism, after re-imagining historical figures like Martin Luther King and Malcolm X in the style of the album’s artwork.