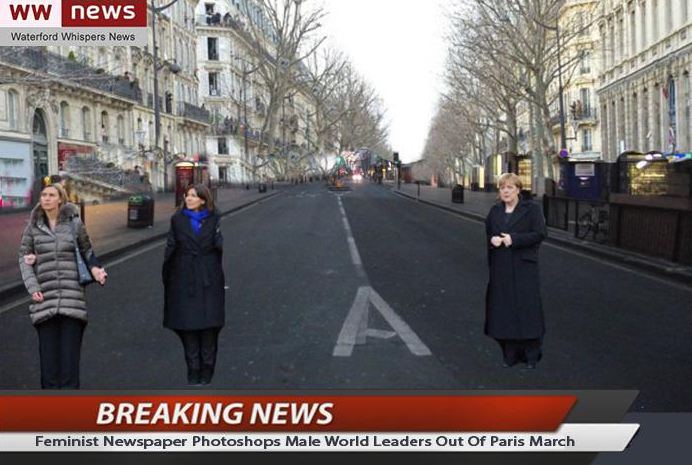 A satirical newspaper has photoshopped out every male world leader from the Paris rally.

The image, which shows just three women, was a published by Waterford Whispers News in response to an Orthodo Jewish newspaper’s decision to crop them out.

Israeli daily The Announcer (HaMevaser) is missing German Chancellor Angela Merkel, Paris Mayor Anne Hidalgo and EU foreign affairs and security chief Frederica Mogherini. Helle Thorning-Schmidt, the Danish Prime Minister, has been cropped so only her hand is in shot.

The paper has been accused of disrespecting the unity march, which took place on Sunday in the wake of the murder of 17 people in Paris last week.

So Waterford Whispers created a female-dominant photo and made up that it had been published by a ‘feminist newspaper’ as a jibe to The Announcer’s obvious tampering.

MORE: New issue of Charlie Hebdo sells for more than £500 on eBay

MORE: New Charlie Hebdo ‘sells out’ before dawn in Paris