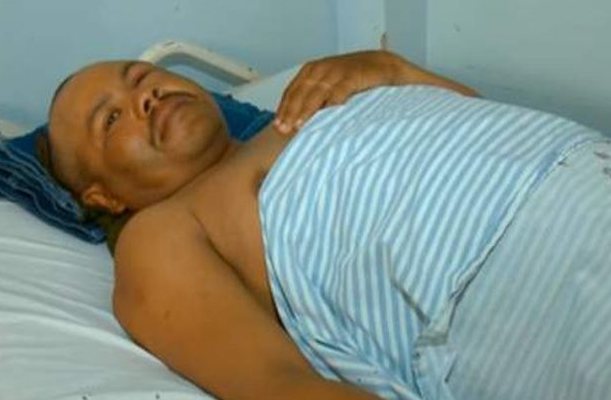 A man has made a last ditch attempt to become crowned ‘hardest person of 2014′, after making a two hour trip to hospital with a knife stuck in his head.

Juacela Nunes drove his motorcycle to his nearest hospital with the 30cm-long blade embedded in his skull after being stabbed at a party.

Incredibly the knife missed his eye, causing no serious damage.

After driving 60 miles to the hospital in Teresina, Brazil, hard man Juacela managed to stay awake as doctors removed the knife from his head, even though he also suffered stab wounds to his chest and throat during the attack.

Police believe a group set upon Juacela during the incident, however he claims he cannot even remember being stabbed.

‘I did not see the moment of the stabbing, but at no time fainted and remained conscious even with pain,’ he told G1 news website.

His wife called his survival a ‘miracle’, while doctors say his is currently recovering and in a ‘surprisingly’ good condition.

MORE: Man is jailed for punching a hole through an £8 million Monet painting

MORE: Woman with kitchen knife in her head survives attack – and even describes assailant to police