Man goes to car wash with son, finds son communicating with unknown stranger in the boot 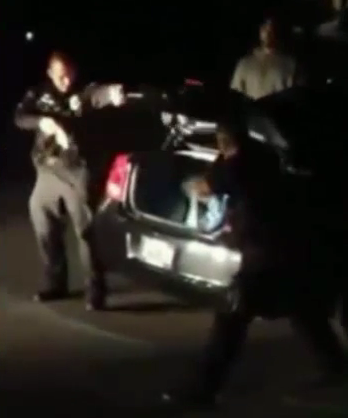 When you visit a car wash, you expect to come out with a clean and shiny chassis, sparkling hubcaps and maybe a new air freshener – although generally not a complete stranger in the boot.

Returning home from a garage clean, a father and son noticed a knocking noise from the car – not realising it was a strange man, rather than a mechanical fault.

Sal Landeros from Montclair, California told ABC 7 of when he and his son Chris went to investigate the noise: ‘I said “Open it slowly.” [My son] saw the eyes and slammed it back again.

Police officers arrived at the scene and, armed with taser guns and firearms drawn, finally opened the trunk.

MORE: Minister says he has ‘no intention’ of legalising naked weddings

MORE: Jesus gets tired of appearing on slices of toast and pops up in a wet dog’s ear

Out jumped a visibly relieved man who was promptly handcuffed by officers.

The brother of Chris, Eddie Landeros explained what the stowaway said on being taken into custody: ‘He was saying sorry a lot and he was running away from someone that needed his money, because he didn’t pay up or something.

‘I guess he worked at the car wash too.

‘He must have got in while they were washing it. He just closed the trunk on himself.’

It is not yet known what charges the man may face.