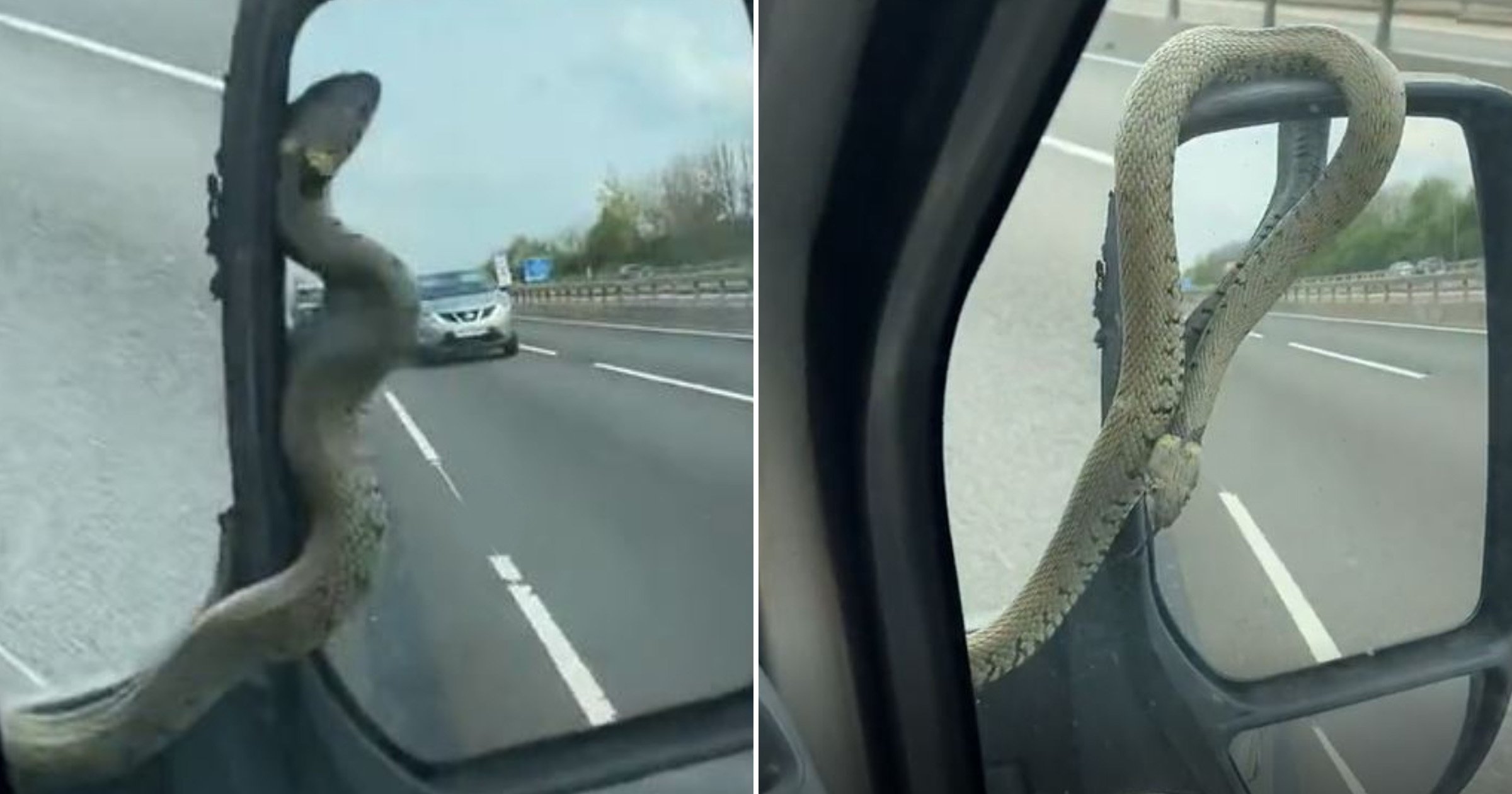 Ever freaked out about a spider or a fly sharing the car with you?

One man had an even more shocking encounter, when he looked in his wing mirror to see a snake wrapped around it.

James Bristow was driving along the M5 towards Staffordshire when he noticed the slithering stowaway.

His son Charlie, 25, got out his phone to start filming, and captured how one of the family anxiously says ‘bloody hell!’

A passenger can be heard saying: ‘Jesus Christ, I don’t think I have ever seen a snake.’

They correctly identify it as a grass snake, and try to find somewhere to pull over where it can get to safety.

But sadly, there was nowhere to stop as it was a smart motorway.

After moving from the front bonnet and onto the wing mirror, the snake then drops onto the road.

Those in the car shout ‘oh no’, and the video ends without showing whether the snake managed to make it off the carriageway.

Charlie posted the video on TikTok on Sunday, writing: ‘Just cruising down the M5 when this happened.

‘We tried to pull over but there wasn’t a hard shoulder.’

The video has been viewed over 25,000 times and attracted dozens of comments.

Another wrote: ‘I’m going to pretend there’s a part two and the little guy is okay.’

A third added: ‘You should have opened the window and let him in. He’s just a harmless grass snake.’

But another said: ‘I would have crashed.’

Speaking yesterday, Charlie said: ‘My dad, the driver, spotted it first and shouted “Oh my god there is a f***ing snake there”.

‘My dad steered into the slow lane and slowed down causing the car behind to beep at us. I then got my camera out and started filming.

‘We were probably going 70mph when it popped its head out.

‘We were in the middle lane but quickly moved into the slow lane.

‘We really wanted to pull over and save it, but unfortunately it was a smart motorway so we couldn’t pull over.

‘We were parked in a field and it must have crawled up into the engine bay as it liked the warmth.’

Grass snakes are mainly found in lowland areas of Britain, particularly in the south and south east of England.

The harmless snakes are protected under the Wildlife and Countryside Act making it illegal to knowingly injure or kill them.