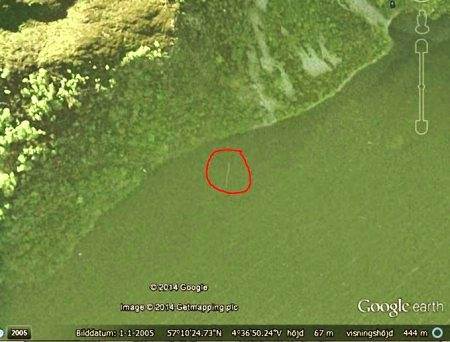 A man who has never been to Scotland has won the best Loch Ness Monster sighting of 2014 for a screenshot taken on Google Earth.

Bjarne Sj Strand, 52, was searching the loch from his computer 800 miles away when he spotted a long, thin object beneath the surface of the water off Horse Shoe Scree on the loch’s southern side.

‘I’m very happy to have won the prize,’ he told the Mirror.

‘I am very interested in anything regarding Nessie and the history of Loch Ness.

‘The reason I found this image on Google Earth was that I was sitting one night at home reading about Nessie and Loch Ness on the internet and thought I would check to see if I could see something from above – and that proved to turn out well.’

Gary Campbell, who keeps the official register of Nessie sightings, told the paper that the image bore similarities to other reports of eel-like objects and called for further analysis of the image.

Mr Sj Strand, whose image garnered 92,000 votes in the poll, said he hoped to visit the home of his favourite mythical creature.

‘I have never been to Scotland but my hopes are that one day I will visit Loch Ness,’ he told the Mirror.