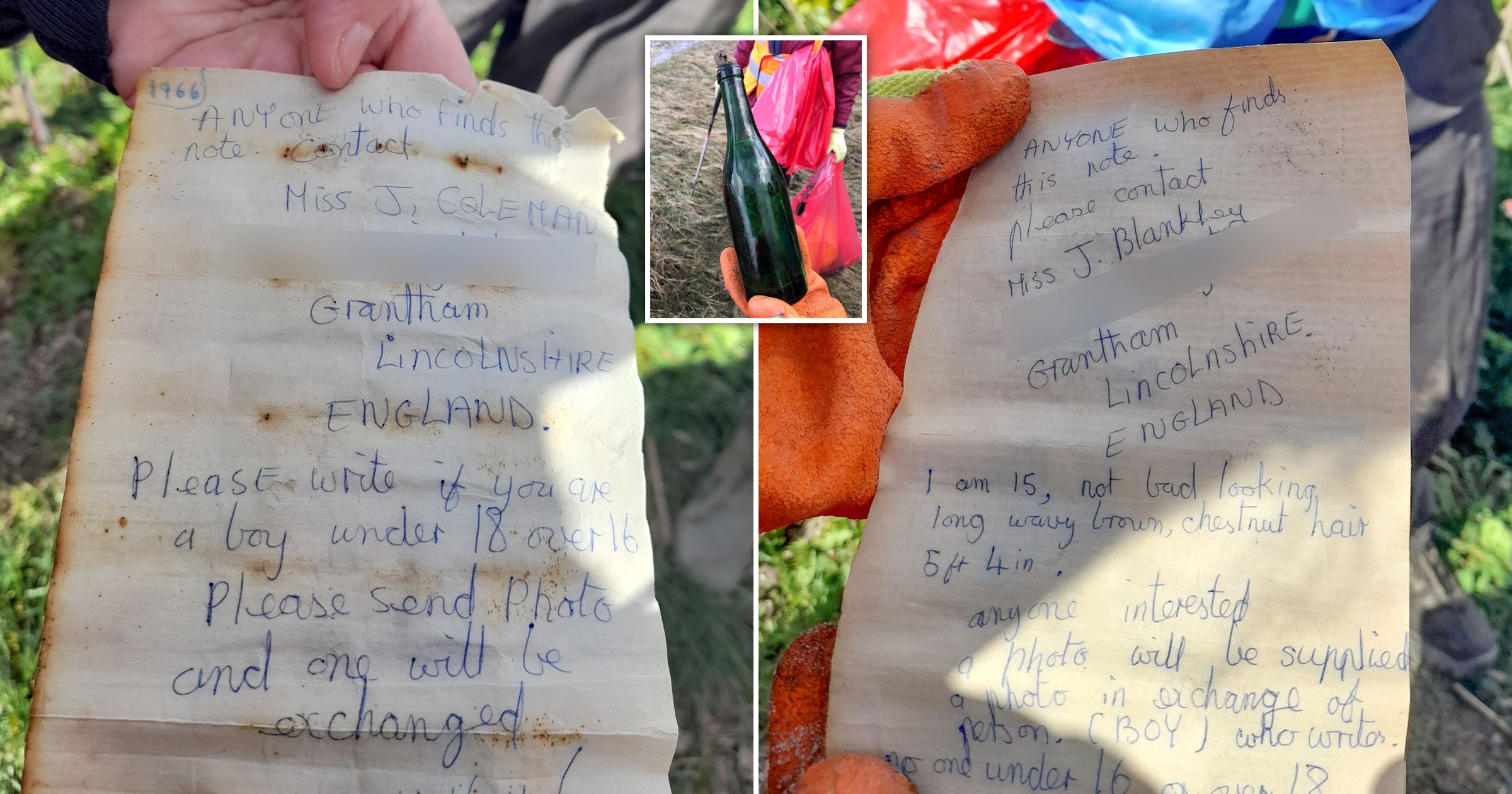 A message in a bottle containing notes penned by two teens looking for boyfriends have been found 56 years later.

The cheeky notes have been floating in the Humber Estuary for nearly six decades, after Jennifer Coleman and Janet Blankley wrote them aged 15.

Their single-minded efforts to find love were seemingly discovered for the first time this weekend, not far from where they were originally thrown in Scunthorpe.

Janet and Jennifer invited boys around their age to write back to them with a picture of themselves.

‘Anyone interested, a photo will be exchanged in person. Boy who writes. No one under 16 or over 18.’

But they never heard anything back – until a mother and daughter spotted the bottle on Saturday, April 2.

Tracey Marshall, 59, and Charlotte, 19, were working for Scunthorpe Litter Pickers when they noticed the object.

Mum-of-three Ms Marshall explained: ‘My daughter noticed the bottle in the reeds and in the mud, it was quite buried but you could just see the top of the bottle poking out.

‘Charlotte dragged it out and cleaned it and noticed there was something inside.

‘We find a lot of bottles but this one had a cork so it pricked our attention.

‘When we had finished the litter pick we tried to get the notes out but couldn’t so we actually smashed the bottle.’

She continued: ‘Inside were two rolled up notes, they were very, very rolled up in cellophane over the top of them.

‘It’s really exciting, we couldn’t believe it when we found them.’

Having posted about the find on social media, the story then blew up.

Tracey later found Ms Coleman online – despite her emigrating to Australia with family in 1973 – and plans to send the letter back to her.

She never married and has no children, but explained: ‘I met a man from Birmingham in my 50s. We had a lovely relationship but he sadly passed away four years ago.’

She thinks they were on a day trip to South Ferriby when she tossed the bottle into the river.

Janet’s family were also told about the find and they say she still lives in Grantham.

Ms Coleman explained: ‘Janet and I were good friends at school; we spent a lot of time together during school holidays, we went our separate ways once we finished school.

‘I had completely forgotten about the message in the bottle and it is in such good condition after half a century, unbelievable.

‘I can’t believe it was in the water for that long.’

Between her and Ms Marshall, they worked out that the bottle was tossed into roughly the same spot it was found in.

‘I think it’s hilarious and unbelievable that it’s been there for 56 years just lying around’, Ms Coleman went on.


‘I can see myself on the river bank throwing the bottle into the water. It probably sank straight into the mud and that’s where it lay all this time.’

She continued: ‘I think we just wanted some boy pen pals. I just thought it would be interesting if we ever got a reply from our notes.

‘You did used to hear about messages in bottles in my childhood but I don’t think we gave it another thought afterwards.’

Ms Coleman, who lived in Grantham until she was 20, moved to Sydney to work as a nursery nurse in the 1970s, but now she would like to hear from her teenage friends again.

‘I would love to say hello to Janet and see where our paths went’, she said.


MORE : Footballer’s heartbreaking final text messages as he was abducted by Russians