Mick Hucknall believes that it helps a band for the frontman to have “good hair”.

The Simply Red frontman, famed as much for his red ringlets as for his distinctive voice and catalogue of hits over 30 years, tells HuffPostUK: “For my profession, you need hair. For a frontman of a band, good hair is a requisite. And obviously red hair is a bright light. There’s no getting away from it, so you’ve just got to deal with it. It’s god-given.”

“We were never a genre kind of band. Our music never belonged to any one set like the New Romantics. It’s the gimmicks that make music sound dated, and we were always playing the long game. And playing live music all those years has been the stabiliser, that’s been the glue of the whole thing. The longevity is the thing I’m most proud of.” 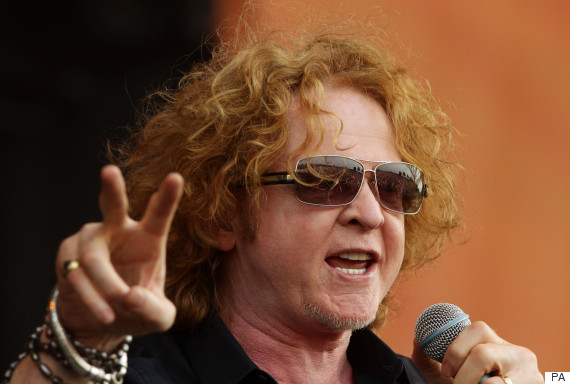 Mick Hucknall has been one of music’s most distinctive characters, visually and aurally, for three decades

It’s obviously paid off, with Simply Red’s album sales boasting 50 million albums and making Mick – chief writer and singer – one of the most recognisable pop stars in the world. He lists his own perfect pop moment as sitting by a hotel pool one afternoon with Keith Richards, listening to tunes through Keith’s speakers and talking music while the sun set. He says now, “I realised how special it was. I thought, I’ve reached heaven.”

Of their 30 years in the spotlight, however, the frontman admits he wishes he’d been able to take many of the earlier times less seriously.

“I’m as comfortable now as I’ll ever be with being well known,” he explains. “But back then, I was too earnest by half. 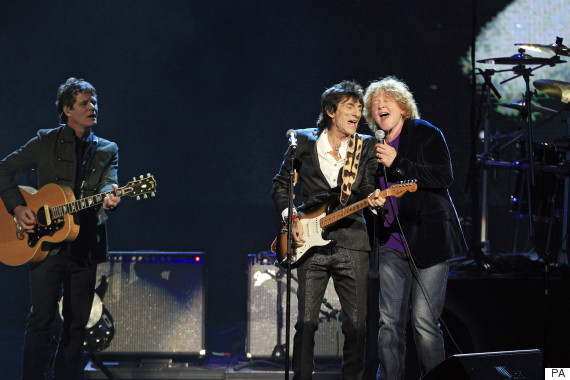 Mick on stage with another of his heroes, the Stones’ Ronnie Wood

He laughs at himself. “It’s so true what they say. Everyone dreams of being in a band because they want to be like the Beatles, but even the Beatles weren’t always that happy. So I guess we should expect these things.”

By contrast, ‘Big Love’ is full of upbeat material, inspired by Mick’s newfound contentmen with wife Gabriella and daughter Romy, as well as memories of his father Reginald, who brought him up singlehandedly, and is the inspiration for the song ‘Dad’.

“The theme of the new album is family, and all that brings,” says Mick. “I never had a bit family, so I’ve married into one, and I’ve learned a lot. It was so natural putting that into the music. I hope people can feel the joy behind it.”

Despite his musical muse still riding high, Mick is adamant he won’t be reforming Simply Red again any time soon, even though he knows this has been said before.

“Simply Red may appear again on the 40th anniversary, but not before then,” he says firmly. “I don’t want to, and everyone’s got other stuff on.

Simply Red’s album ‘Big Love’ will be released on 1 June, with an arena tour to follow later in the year. Listen to the sampler for the album below…