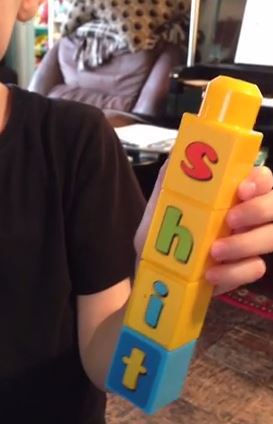 When your young child is learning the alphabet, it’s always handy to have a bright, friendly, and educational toy that might just speed them along on the road to their ABC’s.

But make sure that you’re aware of the toy’s capabilities, unlike this woman – who was left shocked when her child’s building blocks spelt out ‘s**t’.

Mum Roseanne Almanzar became aware of the gaffe when her son started saying the profanity as he learnt the alphabet.

And when she proceeded to examine the toy, she discovered that the swear word was emblazoned on the side of the toy.

‘I suddenly heard him say ‘s**t’, she explained.

MORE: An eight limbed baby is being worshipped as a god

‘And after asking him to repeat it just to make sure I’d heard right, I then asked him where he heard it and he replied, ‘I’m just doing the ABCs’.