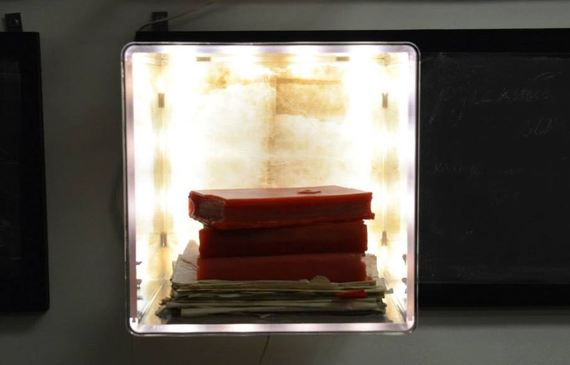 I have always been fascinated by Georgian culture. The sensuality, self irony, delicacy, tact and tradition – its neorealist qualities, brought to life with a unique cultural aesthetic, through the cinematic lense and prism of the arts. Georgian arts offer an encounter with a deep breathtaking narrative that any artbuff is so longing for – a challenging, intelligent conversation that ruffles the mind, warms the eye, and whips the thoughts.

This is why ‘HERITAGE’, the multimedia art project by cARTveli Art foundation in collaboration with RichMix and Dash Arts, has been long awaited and received with the high acclaim by the London’s art scene, as well as long term celebrity supporters like Katie Melua.

“Without critically analysing our past, we can’t start something new”, says Levan Mindiashvili, multimedia artist, who created the concept for the HERITAGE exhibition and invited other artists, whose work is a dialogue between their past and their current environment, to participate. 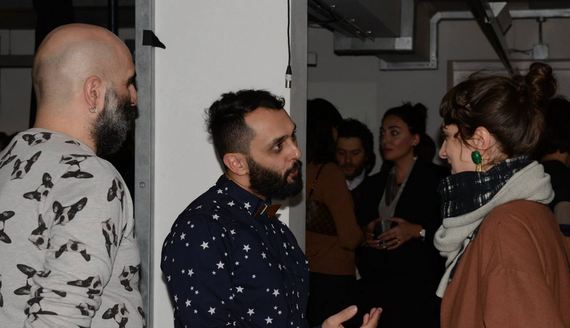 Levan’s work Archives depicts the mentality of the transitional generation, who were left to piece together an identity from an array of opposing influences, like that of the communist childhood and the Westernised present. “The way history was taught at Georgian schools, was always a mixture of morbid war details and adoration of death, fascination of battle and sacrificing your life for your country,” comments Levan. “This image was so strong for me: red, blood, the person has to die for the country”.

The end of the communist era brought with it the instant westernisation of Georgian culture, as contrast to everything communist, it filled every pore of society with new references, consumer goods and its manifests of freedom. But transitions like this can’t happen suddenly argues Levan. “You can’t just erase the past and refuse to recognise the mentality and values that you were brought up with. It’s not an instant process to recognise that, but now enough time has passed, to take a critical look”.

Archives portray the past and present, interwoven by a juxtaposition of communist references and customised IKEA lightboxes, IKEA being the signifier and the ultimate idea of the West. The symbolic objects that relate to the history of the country: bible, icon, small pioneer leader doll and bloodied body parts of feet and fists which were cast from Levan’s father are placed on top of archive papers with notes, yet which are unreadable, erased, existing only as paper. All the body parts were cast from Levan’s father and the facemask is of Levan himself. “This is how traditions are passed in Georgia, from father to son, it is a big part of our identity and culture and I wanted to capture that”. 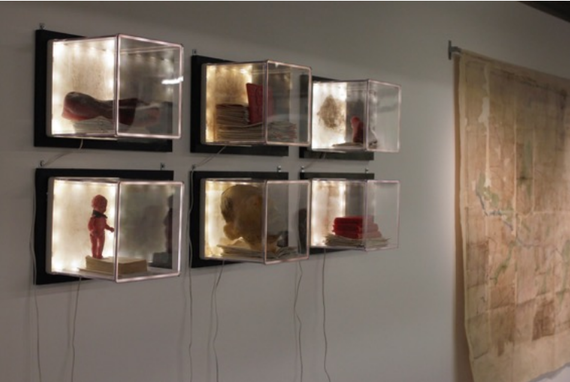 Levan says that his own moment of truth was going to study abroad to Argentina. “Who am I, where do I come from, how can I relate to a different culture? My works during these three years were around the past. The distance helps you a lot to think and analyse. When I was living in Georgia, I really was feeling the urge to leave the country, I needed to see and experience other things. Now when I’m coming back to Georgia or I’m working on something related to it, I feel closer to it, I am more conscious about my culture”.

One of his other works for the exhibition is the map of Tbilisi from 1927 – full of green – a mythologised version from the communist time that Levan remembers from his childhood years. This work starts a new series, which are in the making, of studying contemporary urbanisation and its effects on the citizens. ” I believe that architecture depicts how a country is developing, with historical influences being most pronounced in building construction. I want to use Tbilisi as a metaphor and talk about universal problems and questions”.

Urban structures is a theme running through Irakli Bugiani’s paintings for HERITAGE, who studied old photo archives of soviet and post soviet structures across cities and countries, to find that they are identical in their presence. His works, Sovieticum, explore the dynamics between the buildings and the environment, the effect of the omnipresent faceless architecture and towering concrete. My personal view – Feelings of grounded predictability and other forms of entrapment by architecture. 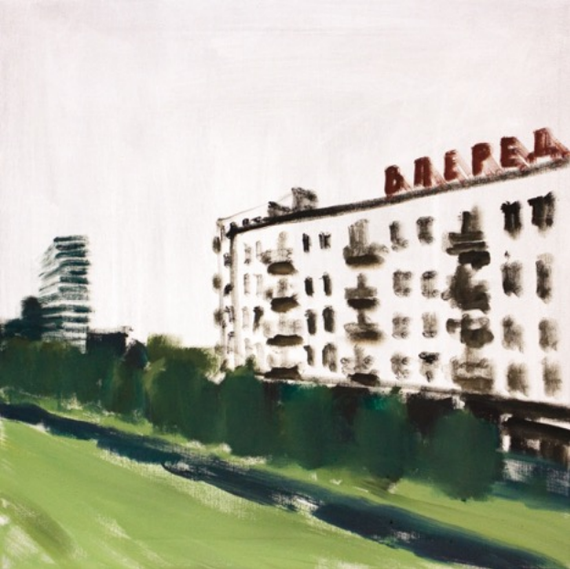 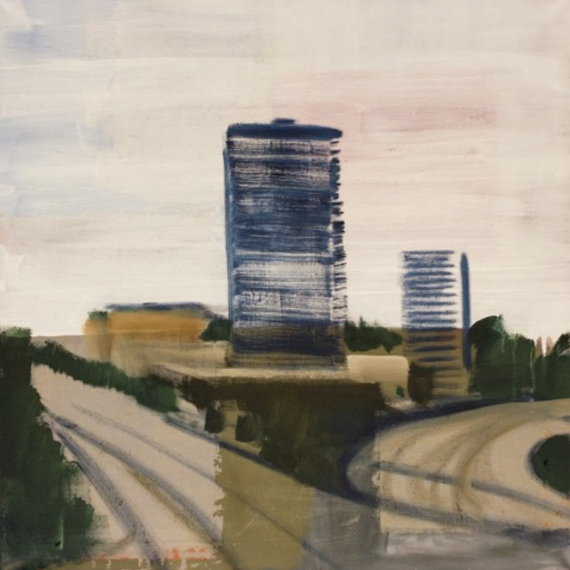 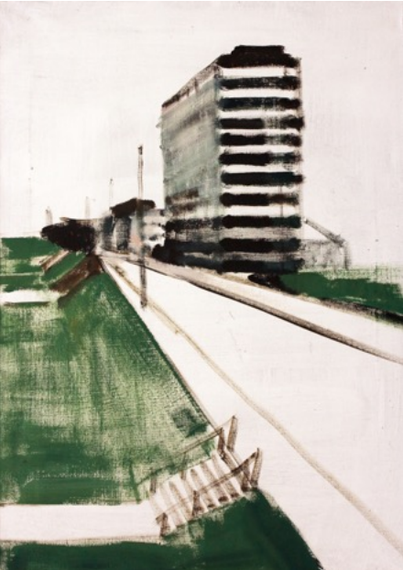 Feelings of entrapment are echoed by Tato, the only artist from this group, who is still residing in Tbilisi. Tato’s ‘Conversations’ are a metaphor of a mental state in which the previous generations have lived in – without way out or an exit. They are not really conversations as such, but a monologue with the self. A monologue of life without an exit, surrounded by concrete and looking at life through a hole, or from an empty swimming pool – a condition which haunts generations and doesn’t offer the distance needed to facilitate a conversation. 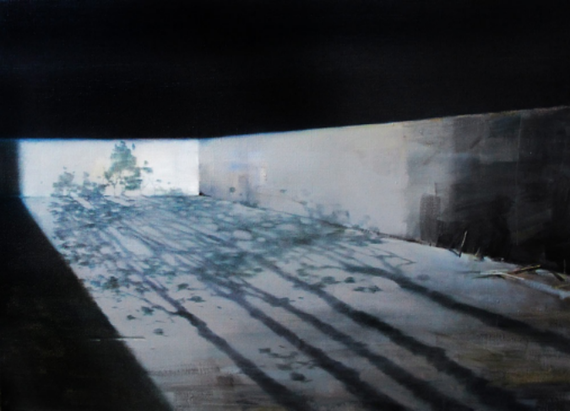 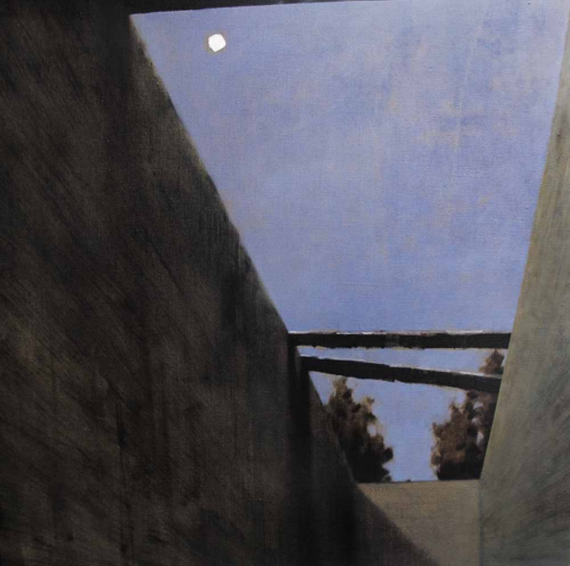 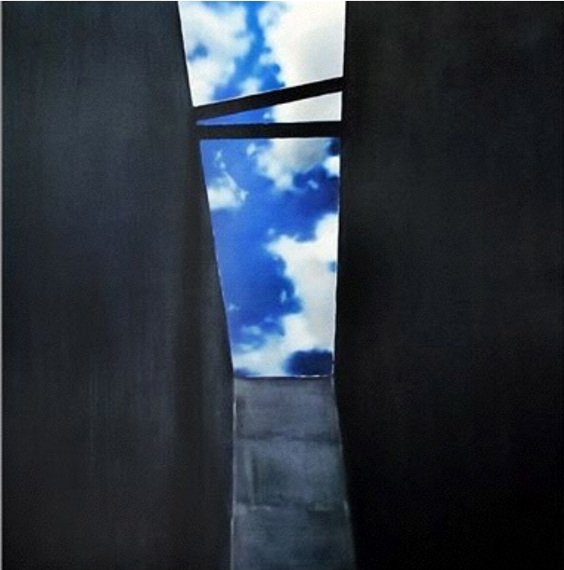 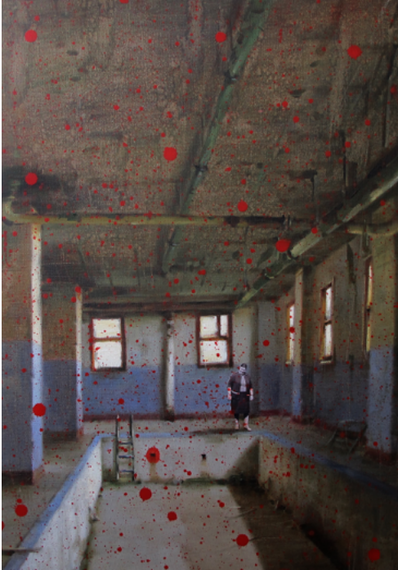 Uta Bekaia’s works are a study of traditions, biological, genetic heritage, everything we inherit on an unconscious level, without being influenced by historical events. His work Fua Sia Tata Sia is inspired by the Mingrelian spells performed by his grandmother. Bekaia, according to Levan, is fascinated by these traditions and value codes that are built into us by family rituals. This particular spell is reproduced exactly as performed by his grandmother, when in his child years Bekaia was loosing his tooth. The work is presented in two parts: a tapestry depicting the tooth and the embroidery of the spell with the letterings provided by Uta’s mother, word for word, as told to her by her mother. There is something incredibly sacred and full of energy about this work. 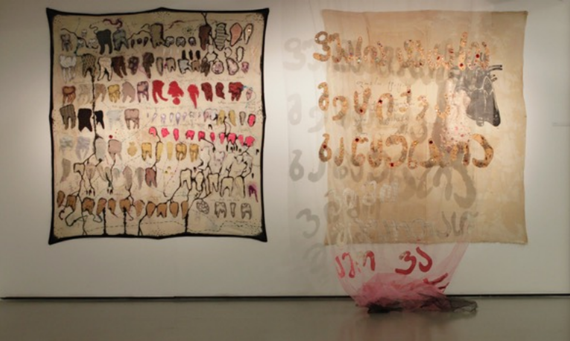 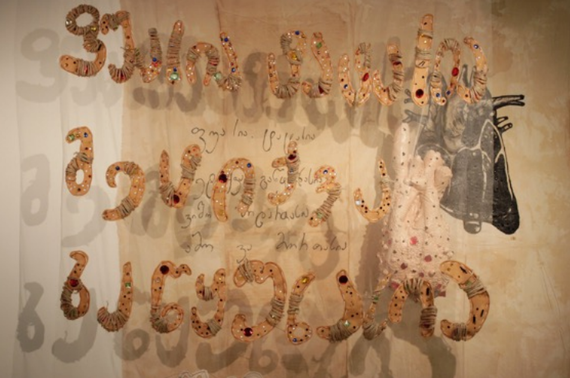 Sacralisation of the past is the theme of Christian Tonhaiser’s works. The only non-Georgian, Tonhaiser comes from Argentina, but with a rich European heritage. Tonhaiser presents twelve objects – photographs enclosed into antique frames. At first glance the commonality between them is unclear. Yet, a closer look reveals precious moments from the family archive, depicting special milestones: first photograph of his grandmother, which she sent to her future husband in Argentina (handwritten on the back, to my beloved husband whom I’m looking forward to meet). His first serious love, his childhood toy. The photographs placed in antique frames are reminiscent of sacred icons, and a curious study into an individual’s search for an identity through his past, shaped by the family archive. 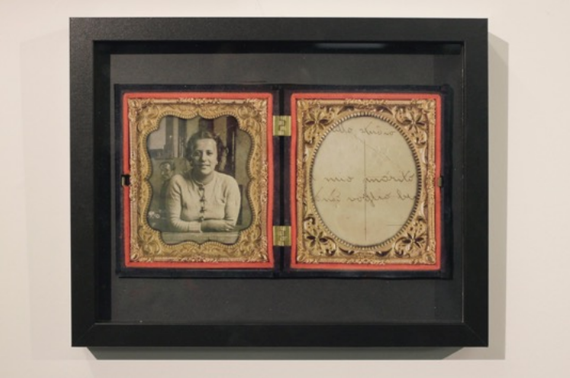 The opening of the exhibition screened a diploma film by Tamuna Karumidze, Zahesi 708 (2001). A week in Tbilisi follows its inhabitants through their daily life – a neorealist tribute and a curious one to watch and admire, which vividly depicts the conflicts of the transitional mentality, which Levan mentions in his works. 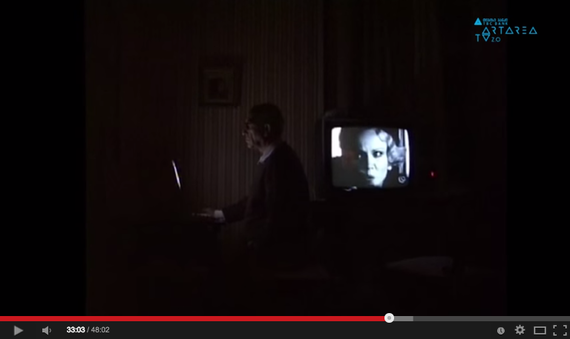 It seems, heritage cannot be understood from the boundaries of a single country, increasingly it’s a wider debate, as our lives go through so many transitions and changes. By opening this field, HERITAGE starts a critical conversation about the variety of points of references for our identities, from socio economic, to mystic and educational.

“People just receive their reality, they are not aware that they are responsible for their life. It’s not an inert process. Any change can be started by critical approach to the past, says Levan.”

HERITAGE first edition, as Levan refers to it, took place at the National Museum of Georgia in Tbilisi in November 2013. From 7-31 January 2015, HERITAGE 2 came to London’s Rich Mix, with each artist creating a special work with references that could be more easily understood by a foreign audience. Levan is currently working on taking HERITAGE to New York.