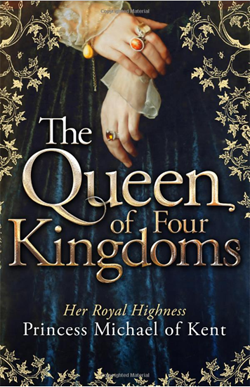 The Queen of Four Kingdoms
By Princess Michael of Kent

My wife and Princess Michael are old friends. They have known each other for many years and so she came into my life as part of Emma’s dowry. Later she did us the honour of becoming Godmother to our son, Peregrine, a role in which she has been wonderfully, even surprisingly, dedicated. It wasn’t very long before we discovered that we shared a passion for history, but more than simply history in the sense of dates and battles and political events, we were both fascinated by the way people thought, behaved and lived, since the dawn of recorded time. Mainly because, fundamentally, they have altered so little. “With the centuries,” she would say, “people have not changed much. Like today, they were capable of kindness or cruelty, they were intelligent or stupid, ambitious or lazy. Customs may change, fashions, behaviour, even morals and religious beliefs, but the hearts of men and women and their basic motives, these remain pretty constant. They are the elements which weave the tapestry of historical life.” This is the view that Princess Michael brings out in her writing.

Of course we agree on the importance of accuracy, that if all the details, even the smallest, are right, then you will gradually build a believable world. I am always impressed that she will check and re-check to make sure that only the correct flowers find their way into any bouquets, that every dish on the table, every frill on a dress, every pattern in a curtain, is right. A description of a garden, of a fancy dress ball, of how rooms were prepared for a royal confinement or a christening or a wedding, are all entirely true to life. Even the scents of that earlier world — some sweet, some less so, help the reader to feel present, a part of the action, so they can almost smell the fear or excitement of the characters in the story.

And the stories told by the author are good, as well as true. Her heroes and heroines are carefully chosen, since their lives and adventures must grip the reader into wanting to know more. Her books may be historical, but they are not just concerned with wars and treaties, but instead they are invariably informed by this same fascination with people, their hopes and their dreams. So the reader enters the century, the country, the city and the house where the action is taking place, with the combination of recognisable characters and flawless detail to draw them in.

I am always rather impressed that the Princess never writes about a place she has not visited. Even if a palace or castle no longer exists, she will go to the site where it once stood, and visit other contemporary buildings, to get a sense of the era when her characters lived there. Naturally, this takes a good deal of research but the results, to me anyway, make it worthwhile.

The Anjou Trilogy, her latest work, is her first novel, an epic tale of passion and power, divided into three volumes, of which The Queen of Four Kingdoms is the first. The author originally began with the intention of writing pure history as in her earlier books. It was only when a well-known French pathologist informed her, and with proof, that her second heroine, Agnès Sorel, had too much poison in her to have taken it accidentally, that Princess Michael was faced with a conundrum. The evidence suggests that this famous beauty, the mistress of the King of France, who was always supposed to have died in childbirth, was in fact murdered. But how could she investigate the case and even point to a possible killer without breaking with accepted history? Because whoever did poison the Royal favourite certainly got away with it. The more she considered her subject matter, the more fascinating the supposed crime became. Why would anyone risk so much in killing her? Agnès Sorel was so ill after the terrible birth of her daughter that she would surely have died anyway. “Ah,” came the pathologist’s reply, “but someone wanted to make sure.”

With her customary commitment to accuracy — her previous biography of Diane de Poitiers, The Serpent and the Moon, was checked by a Professor Emeritus of French Renaissance History — the Princess found herself faced with a murder she could not possibly solve so long after the event, a murder which was not even suspected until a few years ago.

It was only then that she began to listen to those writer friends who had been urging her for some time to write historical fiction. I was one of the chorus, having been very taken by all three of her previous books. I thought it was time for her to try her hand at taking a further step into the past and actually make her characters walk and talk. I confess she had resisted the suggestion until the evidence that her heroine Agnès was probably poisoned, changed everything. Only in fiction — albeit truthful fiction — could she intimate, or speculate, who the murderer might have been. Of course, that would not be proof, but it would be a better option than finishing an historical biography with: “P.S. Now we know she was almost certainly poisoned.”

To succeed in this new version of what had grown into a trilogy, it became necessary to begin again, examining each character, even those previously considered innocent or benign, raking over their motives — or lack of them — and imagining scenes that might not have been recorded but which could fit in with known events. The result: From there having been no possible suspects, suddenly there were too many. Everyone seemed to have a reason to eliminate the king’s mistress.

Of course, it had to be someone who (a) had a very serious motive, indeed, as well as having (b) the opportunity, and (c) whatever they had to gain from her death had to be worth risking the wrath of their Sovereign. This narrowed the field to about five possible suspects, but there was still no absolute proof… And so a new trilogy was born.

I find the outcome a real success. The factual fence-posts are there and cannot be disputed, every character existed, all the dates of births and deaths are correct. The battles and treaties, the marriages and even the murders are true. And in between the facts is the glue that holds the details together and makes a gripping read. That is the skill, which gives us pleasure. For me, Christmas is a reading, restful time (except, perhaps, for the day, itself) and I like particularly to read a book that sweeps me into a complete world, somewhere else. It may be a true somewhere else, but it should be far from our own every day. That is precisely what The Queen of Four Kingdoms will do, take you back into a place of high risks and high stakes, where the prize could be great, but the price could be greater. I loved it and I hope you will, too.