David Cameron and Nick Clegg being absent, it was left to Ed Miliband to adopt a superior, “look-everyone-I’m-the-most-important-person-here” air at this frankly B team debate. The effect was that of a supply teacher who had been told, five minutes before the primary school assembly, that the head was on holiday and so he could read […]

Newzoids: Can Any ITV Satire Exorcise the Spectre of Spitting Image?
ladsfads.com

Newzoids debuted on ITV on Wednesday 15 April and brought with it the return of puppetry to our screens. In place of latex, Newzoids has marionettes, kind of satirical Thunderbirds, albeit with additional sophisticated animation from co-producers, Factory. Along with Citrus Television, who co-produced the award winning Horrible Histories, they’ve created something with the familiar […]

She broke down in tears on last week’s episode of The Real Housewives Of New York, claiming she was homeless due to her ex living in the home she ‘worked to buy her whole life’. 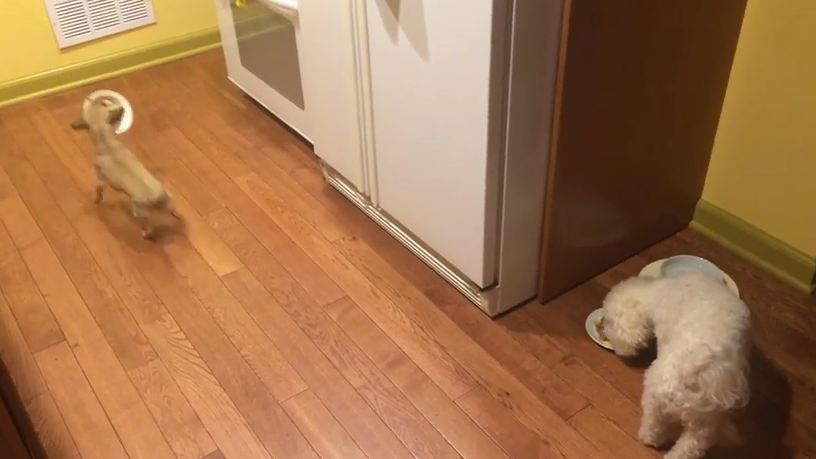 You might assume that dogs like to eat alone to make sure no one pinches their food. For Bonnie the chihuahua, this is most definitely not the case. MORE: Man secretly films himself proposing to girlfriend using GoPro attached to pet dog’s collar She would much rather chow down alongside her playmate Clyde the Bichon Frise. This […]

Dancing postman knows exactly how to have a good time at work
ladsfads.com

Considering that they’re tasked with delivering post to thousands of homes on a daily basis, it’s no surprise that Royal Mail workers have found their own way to make their rounds slightly more enjoyable. And this postie in Bristol decided to lighten up the job by busting some impressive dance moves with a customer. The […]

When Naomi Campbell gave James Corden a lesson in catwalk etiquette, we didn’t realise he’d be making his runway debut quite so soon. Regardless, fashion-lovers Burberry’s LA showcase got a surprise on Thursday night, when the brand roped in the ‘Late, Late Show’ host to provide the show’s grand finale. Werrrrrrrrrrrrrk! True to form, James […]

It’s been yet another busy week in showbiz, starting Coachella and ending with a rather spirited attack on hunting from Ricky Gervais – but what are the stories and videos in between that have kept us entertained this week? 1. Rachel Riley’s ‘Countdown’ Mishap It’s not big or clever, but a rude word on ‘Countdown’ […]

Zayn Malik Debuts Shaved Head And Thanks Former One Direction Bandmates In Acceptance Speech At The Asian Awards (PICS)
ladsfads.com

Zayn Malik made his first public appearance since leaving One Direction, at the Asian Awards on Friday night, and debuted a shock new look in the process. SEE MORE: Naughty Boy Brands Louis Tomlinson ‘Needlessly Provocative’ Over Feud Zayn Denies Being Banned From Hanging Out With Perrie 1D ‘Stronger Than Ever’ As A Four-Piece The […]

'Britain's Got Talent': Our Best And Worst Acts From This Week's Auditions (PICS)
ladsfads.com

Thought a “talking dog”, a roller-skating gymnastic act and an actual chicken walking an obstacle course were going to be impossible to top? Think again, people – this is ‘Britain’s Got Talent’ we’re talking about, after all! MORE ‘BRITAIN’S GOT TALENT’: Are These The Worst Auditions EVER? Yes, Probably. ‘Britain’s Got Talent’: Which Judge Are […]

Jeremy Clarkson Thanks Supporters In 'Heartfelt' Message, Says He'll Miss 'Top Gear' 'More Than He Will Be Missed'
ladsfads.com

Jeremy Clarkson has spoken out about being sacked from ‘Top Gear, admitting that he’s going to miss his time on the BBC series. SEE MORE: Jeremy Clarkson Set To Return In New ITV Show Sue Quits Twitter Over ‘Top Gear’ Fans’ Abuse Police Confirm Clarkson Will Face ‘No Further Action’ Over ‘Fracas’ Last month, it […]

For the first time in eight years, Dermot O’Leary can do whatever he likes with his Saturday evenings, now he’s no longer going to be hosting ‘The X Factor’. He could start attending a Saturday night book club. He can finally go on a cinema date on a weekend. Or, of course, he could finally […]

Madonna Kisses Drake, Sexual Harassment At Music Festivals And The Return Of Katie Hopkins: Our Five Biggest Blogs Of The Week
ladsfads.com

It’s been yet another eventful week in the world of showbiz, entertainment and celebrity, with the biggest news stories of the week offering plenty of scope for discussion and debate. Luckily, here at HuffPost UK there have been some interesting points raised by our bloggers, which provoke discussion and can help offer a different take […]

Don’t be alarmed, but a bunch of zebras are on the loose in Brussels
ladsfads.com

This happened in Brussels earlier. Yes, zebras pic.twitter.com/9QGRQjk8ob — Hannah (@hvn42) April 17, 2015 Either the rules for who can take part in marathons are being relaxed, or there is a herd of zebras on the loose in Brussels. That’s right, a group of zebras (also known as a ‘dazzle’, seriously) have been spotted running around […]