In 1859, Mary Anne Evans became George Eliot in order to be taken more seriously as a novelist at a time when it was believed women wrote only light romances. Today, it’s male authors who adopt female pen names to be taken seriously as romance writers.

The late best-selling saga writer Emma Blair was only revealed to be a 6′ 3″ Glaswegian called Iain, when ‘she’ was nominated for the Romantic Novel of the Year award in 1998, and he turned up to the ceremony. Even ex-SAS hard-man Chris Ryan changed his name to Molly Jackson when he switched from war books to pen love story The Fisherman’s Daughter.

The reason for the sex-swap is a belief among publishers that women (the main market for romance) won’t buy books by male writers, and vice versa. That’s why JK Rowling opted for gender-neutral initials, so as not to put off boy fans.

Whether readers really care if chick-lit authors are chicks is debateable. Blair’s sales soared after Emma outed herself as Iain, and American author Nicolas Sparks has always sold romance by the ton without changing his name to Nicola.

Intriguingly, most pseudonymous authors of either sex make no secret of their true identities. The novels of Annie Sanders reveal on an inside page that she is in fact two women: Annie Ashworth and Meg Sanders. Yet Annie (Ashworth, that is) told me their publisher insisted on a collective moniker, fearing readers wouldn’t buy fiction with two names on the cover.

An author name, then, is a brand and it makes sense to choose one that fits the book, be it tough and masculine for a hardboiled thriller or soft and feminine for romance.

When I started writing romance novels like Polka Dot Dreams, Nashville Cinderella and The Showman’s Girl, I chose the pen name Julia Douglas to separate my fiction from the journalism and non-fiction books such as Circus Mania which I write as Douglas McPherson. I also thought that if I wrote magazine fiction told in the first person and the readers saw a male by-line, they might assume the narrator was a man when the character was in fact a woman. 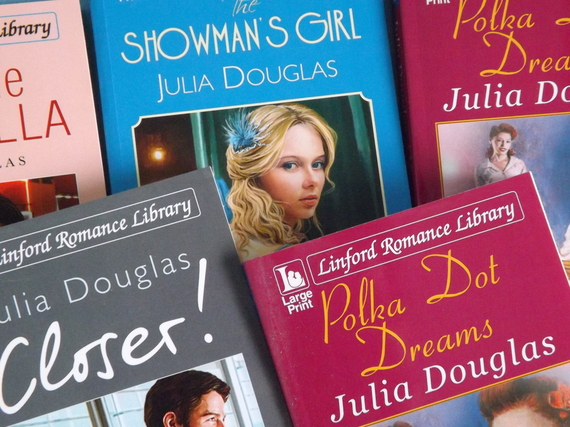 Taking my lead from married crime writers Nicci Gerrard and Sean French who pooled forces as Nicci French, I borrowed my partner’s first name, Julia, and turned my first name into a surname because I thought Julia McPherson was too evocative of the Highlands.

I give interviews as myself, though. In fact, making my ‘secret’ identity a talking point has proved a useful publicity tool. Everyone wants to know if I slip on a pair of high-heels when I sit down to write. The answer, of course, is no; fluffy slippers are much more comfortable.

But I’m not the first to use my pen name for publicity. When novelist Madeleine Wickham re-branded herself as Sophie Kinsella to pen the frothy Shopaholic series she initially concealed her identity with mysterious publicity photos that hid her face. She later revealed her double life as a way of promoting her book Can You Keep A Secret?

An earlier version of this article appeared on the author’s blog: www.juliadouglasromance.blogspot.co.uk