Putting More Diversity in Comics and Illustration: Why I'm Taking the #NonIdentikit Challenge

I love comics, and as someone who draws comics and writes and illustrates children’s books, I sometimes get peeks at the sketchbooks of children and teenagers. At least half the time, I see they’ve filled the entire sketchbook with faces… the same face, drawn over and over. Not their own face, but a face inspired by Japanese comics and anime cartoons such as Sailor Moon, with huge eyes and a pointy little chin. The hairstyle might change as they move from character to character, but the face stays the same. 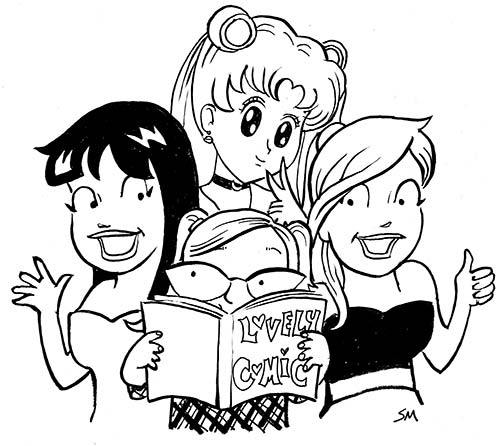 I grew up loving Archie comics, which weren’t all that different. My favourite two characters were Betty and Veronica, and their faces were identical, but Betty had long, straight blond hair and Veronica’s was long, straight and black. I see the same identikit thing with superhero women: visually interchangeable except for hair colour and costume. I remember wondering about that, even as a kid. As a grownup, I watch illustrators post drawings on Twitter, and many of them have these same faces and idealised bodies.

Those are all right, but I’m getting bored with it. As an illustrator, I want to see a variety of people in illustrations, and see people push their drawings further to be… not just diverse and inclusive (which is hugely important) but… interesting.

One of the problems with drawing diverse characters in cartoons and comics is that making main characters generic is one way to get readers to identify with them. We read characters into even the simplest shapes, such as this one: 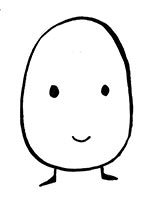 If I put blond hair on that shape, you’ll probably think it’s a symbol for a little blond girl. 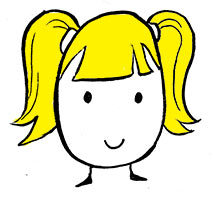 But it could represent an elderly Peruvian man in yellow wig. My drawing would have to be more detailed and specific for you to know that. It’s more tricky when we want to depict someone people aren’t expecting. Would I need to change my drawing style if I wanted my characters to be more diverse? Hmm…

So thinking and wondering about all this, I’ve set myself a challenge: Draw 20 female faces that don’t fit this identikit model but are still striking or beautiful. Arresting enough that if I saw them in the street, I’d turn around and think, WHOA! Faces that aren’t standard Hollywood ingenue or female superhero, but I can’t stop looking. Sometimes they’ll be from non-white ethnicities, sometimes they’ll be the white teenager or 20-something women that illustrators I know seem to prefer drawing, but with a difference. A heavier chin, a big nose, a monobrow, at least one variation that we get in real life.

Three tips if you’re not sure where to start:
1. Draw from life.
2. Study old master drawings and adapt portraits to suit your own modern taste.
3. Just experiment a bit.

Check the Twitter hash tag – #NonIdentikit – for updates, and feel free to use the hash tag to contribute your own! You can experiment with detailed portraits or a bunch of quick doodles on a single sheet of paper: head portraits or full body, awesome outfits, plain clothes, whatever you like. (Keep in mind that some kids might be browsing, and hopefully they’ll be inspired, too.) 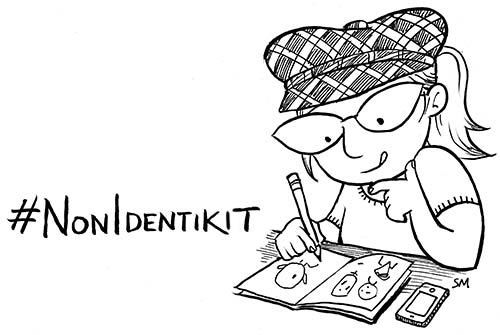 Drawing non-identikit people isn’t easy, and editors usually want main characters to conform for perceived commercial mass appeal. But there’s no reason I can’t try out things in my sketchbook and if I can develop a character well enough, maybe she’ll make it into published story sometime. I love Twitter, it’s like a big practice doodle pad, where I can post drawings and get feedback without the massive commitment of a printed book.

I don’t have the answers; I’m hoping to learn a few things by doing this, practical considerations: how to create characters who aren’t identikit but still have powerful visual appeal. I’ll see what I learn, and you can check back on my blog to find out.

Here are a few snapshots of experimental #NonIdentikit sketches I’ve already posted on Twitter, and a few other people have already jumped in to try their own.