‘Raised By Wolves' Reviews: First Episode Of Caitlin Moran's Comedy Airs On Channel 4 – Was It A Hit Or Miss?

It’s been over a year since the pilot episode of Caroline and Caitlin Moran’s comedy series ‘Raised By Wolves’ aired on Channel 4, and on Monday night, the actual series finally began.

The semi-autobiographical sitcom, set in the Moran sisters’ hometown of Wolverhampton, sees a tribe of sisters and their brother, muddling through life with the help of their unconventional mother Della, and her father. 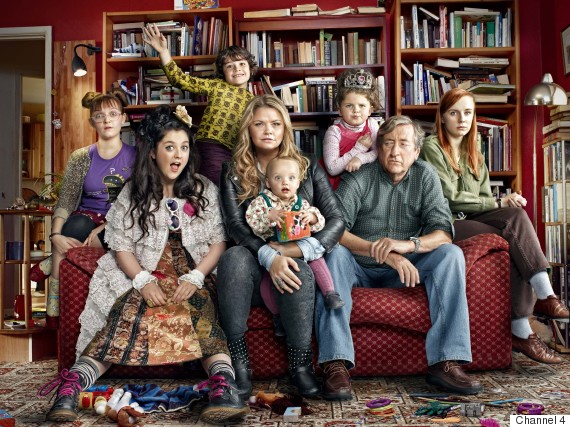 The ‘Raised By Wolves’ cast

With the sisters, who are all named after real-life, strong female women, at its centre, the first episode explored everything, from teenage lust and menstrual cycles to the love lives of pensioners and the hazards of licking a house because you think your crush lives there. (Yes, really)

But is the show a hit or a miss? Here’s what the critics have to say…

Most of the action revolves around Caitlin’s alter-ego Germaine (Helen Monks), a bovver boot-wearing, ebullient over-sharer, and Caroline’s Aretha, an icy-cool introvert played by Alexa Davies. Both young actresses are brilliant, but especially Davies, who looks so much like the real Caroline Moran I can’t quite convince myself they’re not related […] but it was still their straight-talking survivalist mum Della (Rebekah Staton) who had all the best lines.

“It’s lovely that ‘Raised by Wolves’ was upgraded from 2013 pilot to 2015 series, and I so want it to become Wulfrunian ’30 Roc’k, Tina Fey’s feminist retool of machine-gun repartee à la Howard Hawks. But it isn’t yet. There was a moment, for instance, when Germaine got her hand stuck in a letterbox. I was suddenly back in the 1970s waiting for the canned laughter to die back and for Sid James circa Bless This House to open the door and make some off-colour overture.”

The children are all played brilliantly by newcomers. Helen Monks is hilarious as the voluble Germaine (fictionalised Caitlin): eyes bulging with self-dramatising lust at the sight of local yob Lee. And Alexa Davies is a perfect foil as Aretha, a repressed tangle of angry elbows and prickly put-downs.

Mainly, the world they’ve [Caitlin and Caroline Moran] created is lots of bs — bright, brash, blinking funny and brilliantly realised. It would have been easy to make the show totally Caitlin-centric: instead it’s a true ensemble piece in which it’s the homeschooled Garrys against the world (or at least against their small West Midlands world — a drive up the ring road to smell the local brewery is a day trip here).