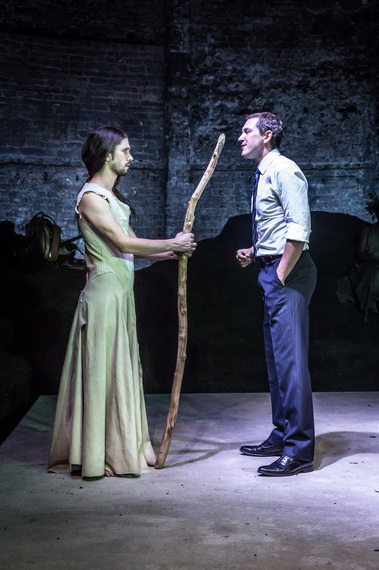 What I love most about the Almeida Theatre is the risks that it takes and, my god, its new production of the Greek tragedy, Bakkhai, is a massive, massive risk. At times it is one of the most impressive pieces of theatre I’ve seen; at other times it’s completely insane. But one thing’s for sure – I’ve never seen Greek tragedy done like this and it’s a production that is impossible to forget.

And he is given the perfect adversary in Bertie Carvel’s alpha male – the smooth-talking but ruthless Pentheus, a King so obsessed with order he has no qualms with throwing his own mother into jail for questioning his autocracy. 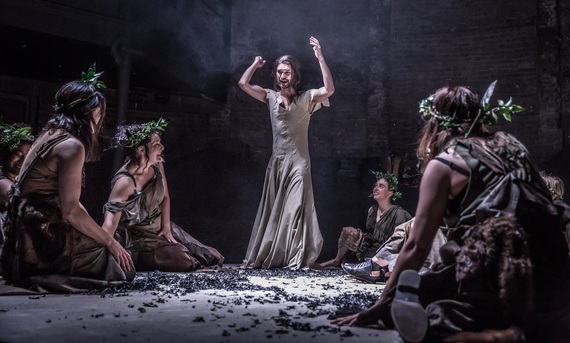 These two dictators, so similar yet so different, circle each other, adamant that only one can rule. And their battleground is Thebes, personified by the Chorus – the women, overwhelmed with fanatical devotion, who have fled Thebes for the arms of the God that walks amongst them.

Watching this power play build up to its denouement is the big hook so it’s brave stuff from Director James Macdonald to stick with Euripides’ intentions and give the Chorus the far greater stage time. Their chanting, swaying and almost haunting single voice both scare and serenade. It’s a clever way to manipulate the pacing of the show, keeping us waiting, balancing out the tension of the main battle.

For 90 minutes this production is scintillating. The translation from Anne Carson is daring and contemporary. Its blend of dramatic text and witty colloquialism is effortless and a real highlight. The staging is superb and the acting is awesome – some of the finest performances you will see this year. 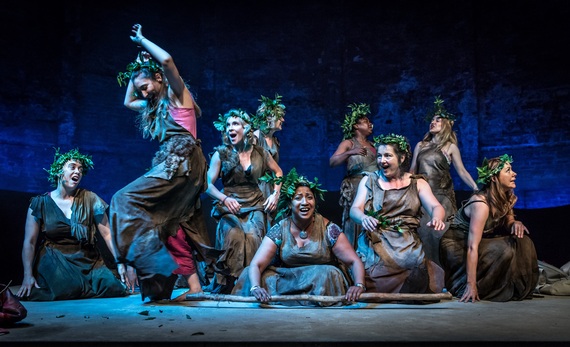 Ben Whishaw mesmerises and Bertie Carvel is incisive and brilliant. But special mention must also go to the magnificent Kevin Harvey, who excels in a myriad of supporting roles, and the women of the Chorus who captivate completely.

But then Bakkhai descends into complete madness and the whole production just goes… well, for a while I didn’t know where it was going. The great battle between these two men never materialises, Pentheus too easily outwitted. Ben Whishaw, shorn of the long locks of Dionysus, scampers onto the stage as (seemingly) another character, the Chorus whip themselves into an unbridled frenzy – stamping and shrieking as if possessed – and Bertie Carvel takes to the stage as some mad, dragged-up version of Gaga cradling a decapitated head – his own.

It’s at this point that you just think – what? What happened?? Why has everyone gone completely mad? 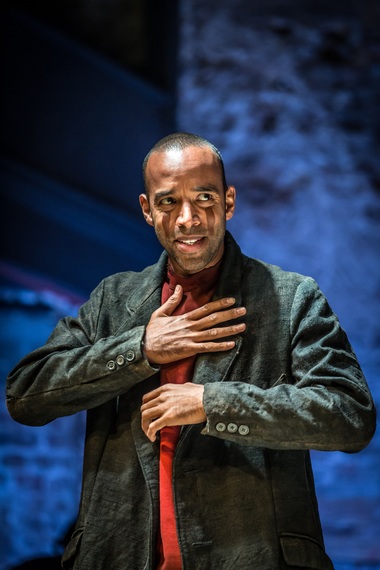 But hang with this, hang in there. Because it’s incredibly brave that James Macdonald chooses not to take his foot of the brakes here. If you are going to depict hysteria, you’ve got to commit to it 100% and that is exactly what this production does.

Because it is this madness, this religious fervour and the destruction and havoc that it can wreak that is the central subject in Euripides’ writing – not the power play. What is the difference between the gods and men? If gods are as vengeful and bloodthirsty as men then we should not worship them. Blood lust is not godly and should not be craved. Madness is dangerous. Religion and violence should never go hand in hand.

Bakkhai is a stunning production – and it is a production that stuns. It may well end up being one of the most divisive productions of the year – some will give it five stars, others will come out dazed and confused. But either way, this production will stay with you and, given the time to take it all in, slowly you realise you have witnessed a truly original piece of staging. Brave and quite brilliant. May theatre never stop taking risks.