Ricky Gervais is pulling no punches in his ongoing criticism of the sport of game hunting.

The comedian began an online debate last week when he posted an image of a grinning female hunter lying next to a dying giraffe.

Gervais asked: “What must’ve happened to you in your life to make you want to kill a beautiful animal and then lie next to it smiling?” 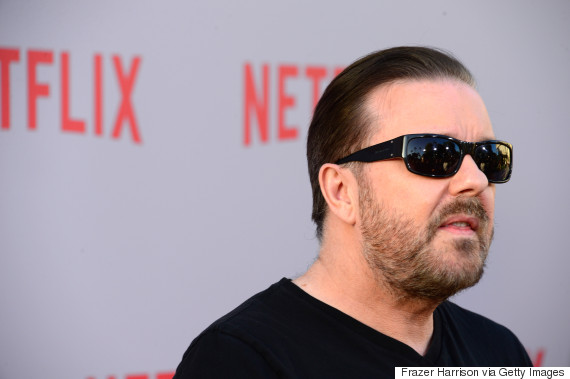 Professional game hunter Rebecca Francis hit back with a strongly worded response in which she accused Gervais of using his “power and influence” to target women in her industry and insisted she had killed the lonely “old bull giraffe” at the request of African villagers who used his meat for food.

The grandmother-of-nine, who boasts of killing bears, wildebeest, moose, zebra and lynx on her website, also claimed Gervais had sparked a raft of death and rape threats against herself and her family.

On Wednesday Gervais hit back with an unforgiving screed on Facebook in which he lambasted trophy hunters for “trying to excuse their grim sport by saying they provide a service.”

What must’ve happened to you in your life to make you want to kill a beautiful animal & then lie next to it smiling? pic.twitter.com/DyYw1T5ck2

“They exploit the needs of the poor,” continued Gervais, adding: “If they were providing a service THEY would be the ones getting paid.

“Imagine a vet paying you to put down your dog and then taking a selfie next to the corpse. And as for ‘the money goes to saving their remaining animals’… Oh dear. Where will it end? Can you pay more to kill the leopard with a hammer if that’s your perversion?

“And would we allow some billionaire sicko to shoot one cancer patient if he gave a million dollars to cancer research? Of course we fucking wouldn’t.

“If they really wanted to do a good deed they would donate the money, and NOT shoot the animal. They would be heroes then. As opposed to murdering scum.” 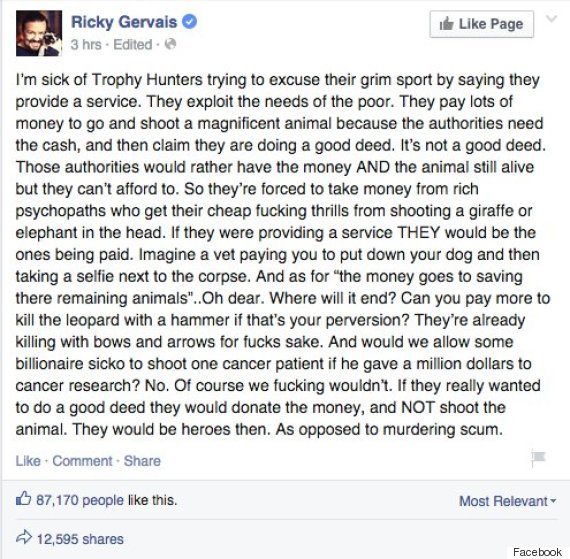 Last week professional game hunter Ian Gibson, 55, was trampled to death by an elephant while leading a hunt with an American client in Zimbabwe.

Gervais shared the story on his Facebook page and it was noted Gibson’s death was met with almost unanimous joy by commenters online.