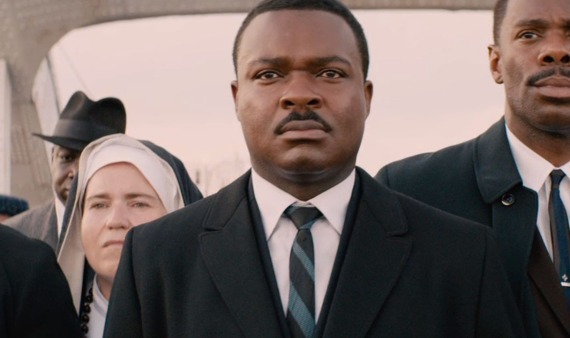 I think it’s fair to say there was barely a dry eye in the movie theatre or indeed, barely a heart that was not pried wide open with emotion at the conclusion of this powerful film.We were not a huge audience in the theatre during a midday, midweek showing, so the universality of the audience experience was a bit more apparent, and potent. Certainly it is a rare occasion when, at the end of a film, absolutely no one leaves their seats until the very last of the credits are shown and the screen goes black, and then some. It was as if no one could move, or wanted to move. Just the acting alone, aside from the mood, the music and the message, and the fact that the magnificent David Oyelowo actually became Dr.Martin Luther King Jr.before our eyes on that screen, deserved at the very least that measure of reverence.

Teacher alert: If you are worried about racist language in your classroom, or any attitudes towards “people of colour”, take your students to see Selma. If not, find a reason to go anyway. But ask them to leave their phones and popcorn at home, because drinking in the nuances of Oyelowo’s compelling portrayal of King’s flawed humanity requires and deserves complete focused attention. Further parental advisory: it’s more than “moderate violence”. That label depends on your stomach for watching innocent, peaceful men and women being blown up, beaten, and killed, for no reason at all, other than that they were black.

I had the opportunity to show film footage of those actual events to my classes whilst studying Human and Civil Rights, students who never even knew this had happened, does happen and in different ways keeps on happening, and the effect was the same, the same as watching most international news today: man’s capacity for inhumanity to man utterly takes your breath away. I think it’s fair to say that sums up the response in both my classroom and in that theatre. And thus this is a story that is never going to lose its relevance in Britain, in America or anywhere, nor its importance to us as human beings, so it needs to be seen, talked about, and passed on.

As if the moral and the message did not trigger the sense of outrage enough, the conversation post-viewing was about the abominable lack of recognition this awards season for the black female director, Ava DuVernay and the star of Selma, David Oyelowo, by the Academy of Motion Picture Arts and Sciences. It’s incomprehensible to many what “oversight” could possibly have undermined their receiving well-deserved Oscar nominations, not to mention recognition for the superb and stellar supporting cast. And the Bafta situation? The mind boggles that President Lyndon B. Johnson managed to push through a Voting Rights Act in 1965 protecting African-Americans’ right to vote within five months of the Selma protests,when the movie that portrayed those events could not arrive on British shores “in time” for Bafta to give it the global recognition it is due. Heartbreaking misfortune?? Injustice? No wonder David Oyelow now lives in the United States. We have to watch American movies and television to enjoy seeing our best black British actors.

Now we see interviews with the star answering the same, interminable question, “So how do you feel about not receiving an Oscar/Bafta nomination?” Given how Oyelow explained his taking on the role in the first place (“God told me to”) and the depth and magnitude of his sensitive portrayal of a man who bore the greatest of all injustices, assassination, the actor is unlikely to reply negatively. No, he has answered these queries with the same dignity and integrity of the wise and powerful leader he portrayed.

So every time there is a feeling that the injustice in the world is a little too much to bear, or that life is unfair, I know it’s time to see Selma again. Pass it on.