For my birthday, my children bought me the book Colorless Tsukuru Tazaki and His Years of Pilgrimage by Japanese author Haruki Murakami. This was exactly the present I wanted! I am a passionate Murakami fan and I was eager to read the new novel, which would afterwards find a place of honor on my bookshelf with all the other Murakami titles I own.

The new book, which sold a million copies in Japan in its first week after being released, may not be everyone’s cup of tea, but it added to my appreciation of Murakami’s writing. The book is quite different from 1Q84, Murakami’s strangely-titled previous novel, in that it is a more simplistic, more human story, and at 297 pages in hardcover, it is one-third 1Q84‘s opus length. 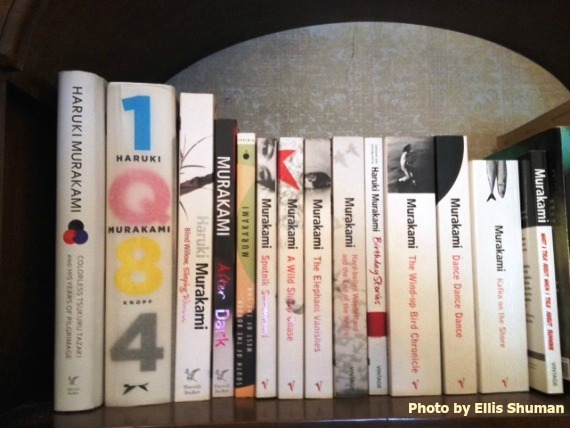 Colorless Tsukuru Tazaki tells the “story of Tsukuru Tazaki, a young man haunted by a great loss,” and this is a loss that accompanies you from the book’s initial pages all the way to its somewhat unremarkable, inconclusive ending. Described as “a story of love, friendship, and heartbreak for the ages”, the experience of the book would be optimized with a backdrop score of Franz Liszt’s three solo piano suites “Années de pèlerinage” (French for Years of Pilgrimage), music that is mentioned repeatedly in the narrative.

“Our lives are like a complex musical score,” Tsukuru thinks, towards the end of his story. “Filled with all sorts of cryptic writing, sixteenth and thirty-second notes and other strange signs. It’s next to impossible to correctly interpret these … there’s no guarantee that people would correctly understand, or appreciate the meaning therein. No guarantee it would make people happy. Why must the workings of people’s lives be so convoluted?”

As is the case in his previous novels, Murakami takes readers on extended visits into the minds of his characters, characters frequently as ‘colorless’ and inept at resolving their problems as Tsukuru Tazaki. These are characters weighed down by ennui and yearning, characters who fail to find love, or respect. With endings that don’t always satisfy, many readers may not find a satisfactory home in Murakami’s writings. So why are his books so popular?

Here are 7 reasons why I read Haruki Murakami:

1) Murakami’s writing transports me to Japan, a country I would love to visit one day. Although there are occasional Japanese words and customs thrown into the narrative, I feel very much at home here, even as a foreigner. I find that I have much in common with characters who drink beer, eat spaghetti, and listen to music, yet do so in an exotic, Japanese setting.

2) The characters in Murakami’s books may be ‘colorless’, but they are very human. There are no super heroes flying across the pages, only people with faults, memories, dreams, ambitions, worries, and concerns. Everyone is believable, familiar. Yet, one shouldn’t be surprised by the occasional appearance of talking cats.

3) The settings in Murakami’s stories are realistic, portraying in detail the bleak nature of Toyko’s suburbs, the beauty of Japan’s snowy mountains, and the frenetic rush of its train stations. Yet, occasionally there are elements of fantasy thrown in for good measure, such as the two visible moons of 1Q84.

4) Murakami’s novels are page-turners, even though they hardly contain elements of suspense and certainly cannot be defined as thrillers. There is something compelling about his writing that makes one continue to turn the pages, almost breathlessly, waiting to see just what will happen.

5) Each book is remarkably unique. No two novels are quite the same. Norwegian Wood, the first of Murakami’s novels I read, is a simple, but painful coming-of-age tale on Japanese campuses at the end of the 1960s. The Wind-Up Bird Chronicle starts with the search for a missing cat and ends up disclosing buried secrets of World War II. Elements of science fiction and a detective story can be found on the pages of Hard-boiled Wonderland and the End of the World. Every Murakami story is surprisingly original.

6) Anything can happen. Sheep may or may not be running the world in A Wild Sheep Chase. Fish tumble from the sky in Kafka on the Shore. Bizarre journeys, runaways, call girls, strange phone calls, a Kafkaesque underworld, lonely people – you never know who you will meet in the stories you read.

7) His short stories are also great. If the length of 1Q84 and Kafka on the Shore are hard to handle, you can get a taste of Murakami by reading his short stories. His collections The Elephant Vanishes and Blind Willow, Sleeping Woman are “determined assaults on the normal”. Murakami “has a deadpan genius for dislocating realities to uncover the surreal in the everyday, the extraordinary in the ordinary,” the reviewers say. Murakami’s writing is very, very entertaining.

Oh, my! I just discovered the existence of the recently published A Strange Library, which is a “fantastical illustrated short novel about a boy imprisoned in a nightmarish library.” Could eager anticipation of new additions to my bookshelf be the eighth reason I read the books of Haruki Murakami?