The Game of Thrones Fandom is abuzz with one topic: Sansa.

The most recent episode of the HBO show has caused immediate controversy.

WARNING: CONTAINS SPOILERS FROM BOTH BOOKS AND SERIES

Viewers were dreading Sansa Stark’s marriage to sociopathic Ramsey Bolton, and their fears were justified. This plot twist deviated from the books, in which Sansa’s best friend, Jeyne Poole – masquerading as her sister, Arya – marries Bolton. It has sparked outrage, after Bolton was seen raping Sansa on their wedding night.

It is difficult to establish which fans find more distressing, the depiction of the rape of a young girl, or the fact Sansa was the victim. Game of Thrones is no stranger to rape. The opening episode saw Daenerys Targaryen raped on her own wedding night by Khal Drogo, while Cersei Lannister has suffered a plot twist that transformed consensual sex into rape. 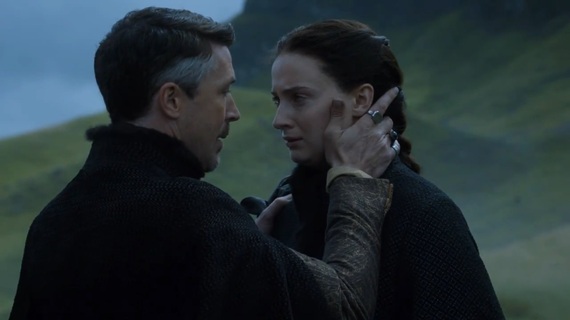 The issue is Sansa’s age, particularly disturbing for fans of the books, in which she is younger still. In addition, Sansa recently underwent a personal transformation, orchestrated by Littlefinger, who taught her the ways of manipulation.

She was given her power only to have it snatched away.

Fans feel her growth over the last year should have enabled her to extricate herself from the situation, or perhaps even comply, to ensure a strong position for the future.

So why didn’t she?

To answer this we must consider context, the first element of which is the wedding night. Bolton doesn’t have the ‘right’ to rape Sansa, any more Drogo did Daenerys. Yet we were not as horrified by Danny’s wedding night, despite Danny’s tears. The difference is intent: Drogo was performing his duty. He was not tender, but neither was he violent. He acted according to his customs, very different to Danny’s, but accepted by his own people. Sansa, however, was violently raped, and humiliated, as Theon Greyjoy was forced to watch. Theon’s tears demonstrate these events are unacceptable by their own cultural standards.

Game of Thrones is, essentially, a medieval culture – at least in Westeros – and we can view their marriage alliances and political manoeuvring through a historical lens. George R.R. Martin has previously defended such events in both books and series, citing historical context. During medieval times it was not uncommon for young girls to be married for politics, and for those girls to unwillingly consummate their marriage.

In Kate Elliott’s Crown of Stars, another medieval-esque fantasy, a young girl named Tallia marries Alain. Tallia has an insufferable (potentially fake) religious complex, which she uses to escape Alain’s sexual advances. They never consummate the marriage and it is annulled once Alain falls out of favour. Tallia is remarried, but her pleas of piety fall on deaf ears. Arguably, her new husband rapes her, yet by his own words he has no desire to commit the act, it is something that simply must be done.

It was their custom.

An unconsummated marriage could be annulled. Sansa was married before, to Tyrion Lannister, and in both book and series Sansa begins to willing undress, accepting it is something that simply must be done.

Sansa had no wish to consummate either marriage. Yet with Tyrion she accepted it as an unavoidable part of her role. She was unable to do the same with Bolton, for while Tyrion respected her, Bolton humiliated her, and while Tyrion was gentle, Bolton was vicious. Bolton pushed the limits of what was an acceptable political necessity too far. He was not expecting her to play her role in a political marriage. He was treating her as any sociopathic rapist might treat a victim. She has to fight him for her survival and sanity. The result was a horrific and violent scene that few are likely to forget.

Was it pleasant to watch? No. Was it true to the characters? Definitely. 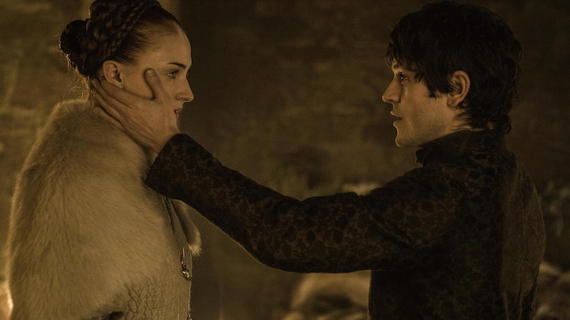 Littlefinger taught Sansa the art of manipulation, but what could prepare her for willingly bedding a sociopath? Had it been Margaery Tyrell, or Cersei Lanister, we might have expected them to act differently. Yet the show has already demonstrated that, despite Cersei’s willingness to use sexual manipulation, she is not immune to a rapist. Margaery on the other hand was cunning. She saw to it her new husband died before they finished their wedding feast, ensuring she was never in Sansa’s position. Should we have expected similar from Sansa? Perhaps. But she is still a child. Even Daenerys had to grow from the girl crying on her wedding night to the sensual woman who won Drogo’s heart and became the Mother of Dragons. Sansa is at the start of her journey, and while she has discovered strength, it is the strength to endure. She endured witnessing her father die at Joffrey’s hand, followed by Joffrey’s torments, tortures, and humiliations, and a forced marriage to Tyrion. Now she must endure this new twist. Where it will lead, we cannot say, for her character is on a different path to the Sansa Stark we know.