Snapshot of the Poet in the Portrait 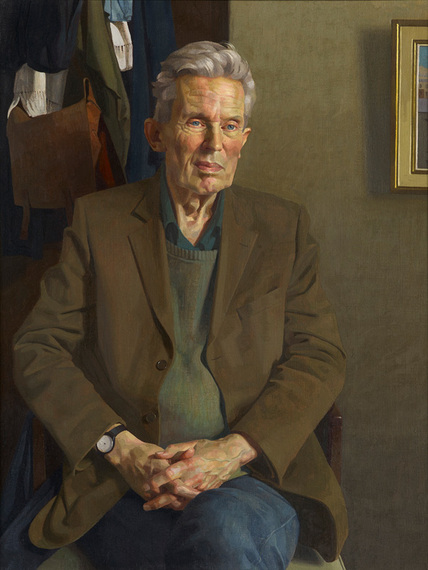 “Every so often
my head appears like a buoy
out of the domestic fog.”

Benjamin Sullivan’s recent BP Award-nominated portrait of Hugo Williams is a powerful thing. It stirs memories in me of my experiences with the poet’s work, and the poet himself, and how both have changed irreversibly in the past decade. Williams, now 74, has published a volume of poems every five years since 1965 and has consistently found an audience with new generations of readers across the decades.

I came to Hugo Williams’ work at the exact time a young man should. It was 2007, I was twenty years old and alone in Edinburgh. Staying in a mixed dorm, unable to sleep through the fumbling of the couple in the bunk above me, I took myself to the over-lit hallway with my recently purchased copy of The Collected Poems of Hugo Williams.

And of course I fell in love with his writing as many young men do; un-pretentious, straightforward, self-effacing, witty, sexual, Britishly modest, Americanly confessional, late-night poems from the pen of an impeccably polite scoundrel. In the thirty-year journey that took him from his first collection, Symptoms of Loss (1965) to his Eliot Award-winning Billy’s Rain (1999), we see his subject matter move ever closer to the source, from the strangers on the pavement, to his neighbours, to his boarding-school memories, to his parents, to his siblings, to the loves of his life, and eventually, inevitably, settling upon himself. By the time he arrived at West End Final (2009), the grand theme of the poetry is the poet himself, viewed specimen-like through impassive, darkly comic self-portraiture.

Later in 2007 I first met Williams. I was escorting a far more talented poet than myself to receive a literary prize at Kings College. I spotted him immediately; the same man from the black and white author-photograph which I had seen a few times, tall, slender, handsome and simultaneously aloof and attentive. A devastatingly aristocratic woman in furs must have spotted me staring, for she approached me during the mingling, free-wine quaffing section of any literary prize evening, and said “Is there anyone here to whom you would care to be introduced?”

And so she made the introductions. I sycophantically gushed to him about his poetry, much to the distaste of the two PhD students either side of him, who had been sycophantically gushing with much greater erudition than me before I had arrived to spoil things. Hugo smiled politely and thanked me for the kind words and I retreated to make more use of the complimentary refreshments.

Two years passed, then on 6th August 2009 at the Whitechapel Gallery, I saw him give a reading and hoodwinked him into granting me an interview. It was my last Summer before becoming an English teacher and I vowed to go to as many live readings and cultural excursions as my budget would allow and write for any literary magazines that would let me. Hugo cordially agreed and had me come to his Islington home 19 days later to discuss his work.

Of my contributions to culture, which are few, I am possibly most proud of that interview I did with Williams. He opened up, responded positively to the detail of my research, contributed incisive theories on what makes some poems more popular than others, and went into explaining his method. Williams is never a particularly guarded interviewee, but this makes it all the more thrilling when you find that you get him onto an uncharted topic. We sat for a couple of hours in his narrow eccentric house, talking. I had him sign a few copies of books, and off I popped to type it all up.

The interview was published in Horizon review that Summer; sadly, Horizon review vanished without a trace some years ago along with all of its contents. There is no trace of this interview to be found anywhere, aside from this blogger’s kind words.

But a sort of friendship with Hugo continued. We occasionally corresponded. I sent him a couple of mix CD’s and poems, he let me come and ransack his house for books he wanted to throw out. One of my proudest possessions, which still sits on my writing desk, is a letter he handwrote me, letting me know that a group of poems I’d sent him weren’t very good. “I don’t know if my insulting pencil-marks even make sense, but I think you can take it?” he wrote.

When I got married, I named the tables after poets. I placed all my friends at the ‘Hugo Williams’ table, which was marked with the quote:

“I have to be on hand at times like this
for table laying,
drink replenishment
and general conversational encouragement.”
– Dinner With My Mother

Then, in 2014, Hugo got incredibly, life-threateningly, ill and produced the best collection of his career in which he meditates on his experiences of dialysis amongst other things. Jacqueline Wilson chose the book as one of her favourites that year. The launch party of the collection was held in a bookshop in London and Williams was still visibly wearing the trauma which had allowed him to write such a powerful collection, but he read superbly, as always.

In the year which followed, my calls to Hugo went straight to voice-mail. I went to his house to leave him a Christmas present, and when someone else answered the door and said that he was too ill to come down, I feared the worst for him. And now in 2016, a year when all of our heroes appear to be leaving us, I find a poem from him in the TLS called ‘African Nurses’ about the trauma of being a long-term in-patient experienced by patient and carer alike.

So, I pick up my phone, and make the call to the Williams residence, fully expecting a tearful relative to answer and tell me that Hugo is hooked up to some monolithic machine and has not communicated in many weeks. Three rings. Four rings. A click. Voice-mail? No, it is Hugo on the other end, voice perceptibly healthier and stronger than I have heard it for many years. Good humoured. Chatty. Self-effacing. New work in the pipeline. Hugo Williams continues to out-grow himself with each new collection, and I look forward to reading what comes next.