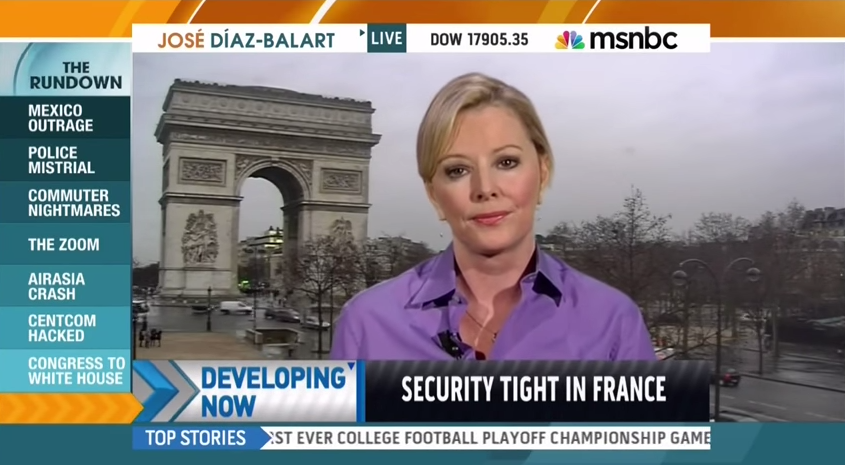 In today’s news of the ridiculous, some people are blaming ‘magical shape-shifting Jews’ for the terror attacks in Paris last week – or at least that’s what one MSNBC reporter is claiming.

Daily Beat reporter Dana Kennedy was speaking on the show about her experience talking to French Muslims in the ‘suburbs’ of Paris – the low-income housing projects – in the wake of the attack on the headquarters of satirical weekly Charlie Hebdo.

And Ms Kennedy says that a ‘cross-section’ of young Muslims living in those areas told her that ‘a Jewish conspiracy’ was to blame for the attacks.

MORE: New issue of Charlie Hebdo sells for more than £500 on eBay

‘They’re outside Paris and there are a couple areas inside Paris where a lot of poor Muslims live,’ she explained.

‘I talked to a cross-section of mainly French-Algerian young men who said it was, pretty much, they felt, the attacks were actually a conspiracy by the Jews to make Muslims look bad and they told me – at least one person told me – that they weren’t just regular Jews doing this. In fact they were a race of magical Jews, shape-shifting Jews that were master-manipulators and could be everywhere at the same time.’

Oddly, Ms Kennedy doesn’t follow this up by saying how absurd that notion is, but instead goes on to talk about how ‘nice’ these ‘dangerous’ parts of the city are, specifically how ‘pristine’ one branch of McDonald’s is.