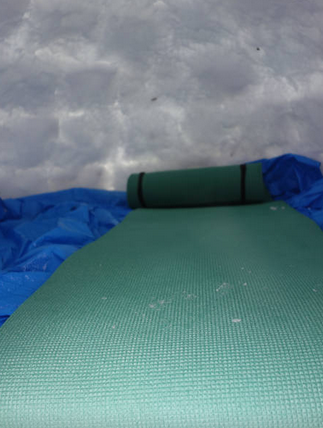 Ever wanted to sleep in an igloo, but don’t possess the skills required to make one (or there just isn’t enough snow where you live)?

You’re wait is over, because someone is now offering one on AirBnB, and it’s yours for just £7 a night.

The igloo is situated in the garden of Pierre, who also built it, near Boston in Massachusetts.

Due to the massive snowfall the area has received recently, Pierre thought he could capitalise on the weather phenomenon by making a cosy little igloo that ‘comfortably fits one, or two if curled up’.

Payment includes the ‘use of a tarp and yoga mat to sleep on’ (but you’ll have to bring your own sleeping bag) and you can even use the kitchen and bathroom facilities in Pierre’s house.

Anyone eager to know what it is like to sleep inside a hollowed out ball of snow will have to be quick however, as the igloo is expected to melt as soon as spring arrives.

MORE: This kid hates Frozen and DOES NOT want to build a snowman

MORE: 13 unusual places you can stay with Airbnb in the UK