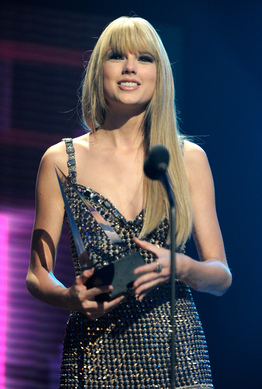 As the masses assembled for Sunday night’s Billboard Music Awards, there was little doubt among witnesses that this would be a big year for Taylor Swift, with her only real competition residing in British soul-singer Sam Smith. The evening wasn’t entirely without surprise, however: the Pennsylvania-born songstress premiered the long-awaited music video for Bad Blood, her fourth single from the vastly successful 1989. The visual was predictably lustrous and energetic, with marvellous special effects and an extensive repertoire of celebrity appearances. It was, as fans have commented, surely the most expensive four minutes in music video history.

[Right: Swift pictured at the AMAs 2010, by avrilllllla]

The Tarantino-inspired video didn’t shrink from flaunting Swift’s new brand of sex appeal, either. She’s never looked better, of course, gyrating alongside fashion’s aristocracy without even a momentary lapse in pop-princess fierceness. To anyone who’s just tuned in it would seem she’s nailed it: she’s got the looks, the sales figures, the roaring arenas, and of course that all-important fanbase. What, I wonder, is left for this germinating orchid to covet? Another genre crossover? Enduring critical acclaim? A little integrity, perhaps?

It’s important when discussing the subjective success of a public figure to consider where they started and what they set out to do. Swift began as a freckled ensemble of curls and diartistic verse; she wrote as the girl who manned the bleachers, a character too lacking in classical vanity to call herself ‘prom queen’ or ‘cheer captain.’ Her music had a certain unpretentious cynicism to it; it deliberately distinguished itself from its primed and polished competition, and it was this unusual sincerity that encouraged the success of Fearless and Speak Now. Swift’s palpable character very much enforced her approach to music: she chose not to embellish her lyrical projects with sexual references, publicity stunts, and inane marketing manoeuvres. She left the grandstanding pop theatrics to the likes of Lady Gaga. In her existed a flicker of the old-time country star trying to win over a new generation–and until recently it burned strong. 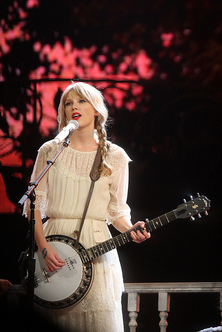 Throughout my viewing of Bad Blood I found myself wondering where that girl had gone. Where was our guitar-wielding prodigy who sat atop those bleachers as though they were a throne? Is she in the studio recording that Speak Now sequel we’ve all been waiting for? No–she’s out flogging meretricious remixes in hope that her fans don’t realise she’s become the new Britney Spears. Katy Perry did the same in 2010: having released One of the Boys back in 2008 – an album preoccupied with the rigours of youth, poverty, and depression – Perry underwent an immensely successful transformation into the unrelenting hit machine that she is today. She cashed out on elaborate music videos, pointless collaborations, and pretty much every sales subterfuge at Capitol’s disposal. It worked, of course – she’s one of the biggest names in the pop pantheon, but in getting there she effectively undermined everything she symbolised for her original audience.

How are we supposed to identify with Swift these days? She’s put honest song-writing on the backburner and all but finished with being remotely relatable. Instead we have flawless production and glossy veneer, propelled by a marketing ploy intent on selling her current material as if it equals its predecessors in quality. The strength of Swift’s catalogue is borne out of her lyrical work, in her flare for weaving rustic heartstrings into catchy pop songs. She’s lyrically gifted, but it’s been a long time since anyone’s seen these gifts put to good use. The Blank Space singer has glammed up, slimmed down, and apparently forgotten everything she used to be good at. Needless to say Swift is no longer on the bleachers–she’s cheer captain and she’s loving it.

This isn’t about policing Taylor Swift’s creative freedom – it’s about realising she’s become everything she claimed not to be back in 2009. In place of the charming acoustic wunderkind who wrote Tim McGraw and Back to December we have an empty husk of a pop star who wants you to buy Bad Blood for $1.29. I’m not suggesting we all burn our copies of 1989 and vow not to speak Taylor’s name again, but I am accusing Swift of controverting everything she initially set out to do. Her talent and endearing lack of self-importance have been consumed by her image and industrial connections. She has become one of those girls she used to sing about, and she appears to be anything but ashamed of it.

I wonder what Tim McGraw, one of her earliest muses, would think of ‘Bad Blood’? I suspect he’d be as disappointed as I am–providing he recognised her at all, that is.