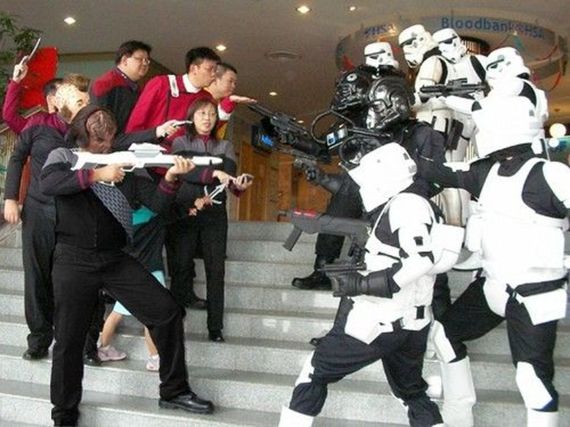 With the imminent arrival of the new Star Wars Episode VII: Force Awakens in December and confirmation that Star Trek Beyond filming has just finished, the 30 year old debate ‘which is better Star Trek or Star Wars?’ has yet again been reignited. Being a Trekkie myself I thought it only appropriate that I share my reasons as to why Star Trek is indeed better!

With Star Trek: The Original Series, The Next Generation, Voyager, Deep Space 9, Enterprise and 12 films that’s over 22 days of material! Star Wars currently has seven films and two television series. While both franchises have a sizeable amount of content available in the form of novels, comic books and games, Star Trek has a much vaster content library.

The science in Star Trek and Star Wars are not only similar to one another but also vastly different. Creator Gene Roddenberry did as much research as he could when it comes to current science capabilities, trends and where he felt it was going for the future. This research is evident in most episodes and you can see some of his predictions coming true with his famous communicators and tricorders becoming modern day smart phones.

One of the innovative things that Star Trek did was to use the cloak of science fiction to address and tackle many social issues that were a big deal at the time. Over the years Star Trek has discussed many issues such as racism, death, AIDS, homosexuality, sentience and a whole lot more.

Not limiting itself to only tackling serious issues of its time, Star Trek also took on the personal struggles of the characters that we all can relate to in one way or another. With everything from Khan dealing with his own demons to Spock’s interesting relationship with humans.

There’s definitely something for everyone

With the enormous library of Star Trek content out there for your viewing pleasure, there’s going to be something you not only relate to, but enjoy. Whether it’s compelling storylines like Voyager’s journey home or epic space battles like Deep Space 9’s war with the dominion, there is definitely something that you or any of your friends will thoroughly enjoy.

A fantastic plot device that Star Trek has used to create some of the most interesting episodes and films is time travel. Some of my favourite uses of time travel in the Star Trek saga have been Star trek IV: The Voyage Home, when they saved the whales, and meeting Mark Twain in the episode “Time’s Arrow” in The Next Generation. Even in the latest incarnations, time travel was used to create an alternate timeline for Star Trek to explore.

Rather than being after-thoughts, or something the creators have put in because they have to, non-human characters have been a central part of Star Trek. With characters like Worf, T’Pol, Seven of Nine, Data, Spock and many more. These characters have had plenty of time and writing invested in them to give them rich and compelling backstories to turn them into the characters we know and love today. With a few notable exceptions, such as Chewbacca, C3PO, R2D2 and Yoda we don’t find out much about the non-human characters in Star Wars.

Teleporters are a unique piece of technology in Star Trek that simply doesn’t exist in Star Wars. Travelling through space in amazing space ships is always going to be cool and both Star Trek and Star Wars do it brilliantly. However the ability to be simply teleported instantly pretty much anywhere you want is such a cool way to travel!

Because Star Trek has a head start of about a decade on Star Wars since their respective release dates, Star Trek has always been ahead of the game in some respects. Also, because Star Trek is primarily an episodic series instead of a film series there are a lot more chances to not create great episodes, but also to make for ones that aren’t quite on par. Whereas Star Wars, currently a six episode film saga, has little to no room for error as any mistakes or poor films stand out much, much more.

No Jar Jar in Star Trek

The title says it all really.

Jonathan Bird is an avid Star Trek fan and the founder of TrekDating.com. When not watching re-runs of The Next Generation you’ll find him tinkering with code making more Spock’s match with Uhuru’s.