The Joy of Accents and Potatoes

You Say Potato is yet another successful collaborative book by David Crystal and Ben Crystal. The title derives from Let’s Call the Whole Thing Off sung by Fred Astaire and Ginger Rogers in the film Shall We Dance. (Already got the tune in your head?) 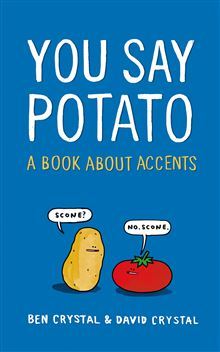 It is written in the form of an extensive dialogue as you read a chapter by David Crystal followed by a chapter by Ben Crystal. This creative form of the book gives the impression of a live talk, and if you have encountered the authors before – you will almost hear the accents.

Ben Crystal‘s tongue-in-cheek footnotes add a similarly creative dimension to the book as a reproduction of a live talk as does his beautiful narrative. As usual, you will find David Crystal‘s writing insightful, detailed and at the same time reader-friendly. The different perspectives that come from the background of the authors as a linguist and an actor make the book a really fruitful collaboration.

Volumes can be written about the fascinating variety of English accents (or any accent, for that matter). In this lovely little book you learn why the Birmingham accent has been getting a bad press, how to “sound blue” (!), how to resurrect an accent (or, sound like Shakespeare!) and much more.

My favourite chapters in the book are in Part Two: Accents Present – “Can you tell – in England?” and “Can you tell – in the Celtic fringe?” Here David Crystal identifies the main features of the accents distinct in individual cities like Newcastle, Birmingham, Liverpool, London etc. as well as parts of the country, like the West Country, the far north, the Midlands, Wales etc.

An interesting phenomenon discussed is the accent levelling when accents influence each other and, as a result, start to sound similar. In a narrower context, such influence is called accommodation when close friends, spouses or simply two speakers subconsciously pick up each other’s way of talking – it can create rapport but your interlocutor may think you are “taking the mick” as Ben describes father Crystal’s encounter with a Glaswegian!

As Ben Crystal takes the stage, he explains how the idea of drawing an accent map emerged. Even though David Crystal initially had thought it would be an impossible task given the variety and liquidity of the accents on the Sceptred Isle, the result is a record-breaking online harvest of “potatoes” from all parts of not only the UK but the whole world! You can add your own accent to this fascinating virtual hub of voices along the likes of Stephen Fry and Jeremy Paxman – yousaypotato.net. Make yourself a cup of tea and spend the rest of the day catching the tunes of iPotatoes here..!

This happy little book really needs an accompanying AudioBook for the ultimate effect. Listening to David Crystal putting on accents (sometimes at his own peril, it seems!) is one of those linguistic fetishes, you know…

I highly recommend the book to all accent hunters and lovers. No less, with the cutest cover design. PanMacmillan have ploughed well!