The Mask of Anarchy – Paul Wager

The title of Paul Wager’s new exhibition at London’s Dadiani Gallery, The Mask of Anarchy, is taken from a poem by Shelley written in response to the Peterloo Massacre of 1819 when a cavalry charge at a mass demonstration in favour of parliamentary reform killed 15 and injured several hundred. The poem ends with the lines,

“Shake your chains to earth like dew
Which in sleep had fallen on you-
Ye are many, they are few.”

The involvement of the common man in the politics of conflict, and the injustice that so often ensues has obsessed the 65-year-old Wager throughout his career and is reflected in this new show. 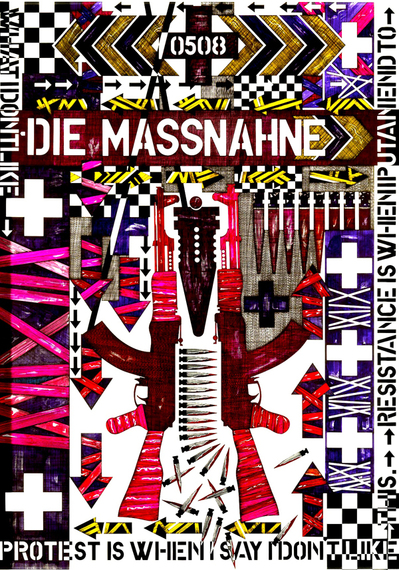 Wager describes himself as “at the inter zone of painting and sculpture”. His series of paintings here such as White Room (above) burst with symbols of revolutionary ardour, conflict, confrontation and loss. Die Massnahne which translates as Measures Taken, is a Brechtian term implying that collective action is more effective than that of the individual, harking back to the sentiment in the Shelley poem. His paintings resemble old propaganda posters, particularly those from France and Germany, in graphic art style framed by polemical slogans.

The works are built up in strata beginning with pencil, then ink, water-based paint, and back to ink on top. The idea is to give the paintings a machine-made effect.

The inspiration behind views of political conflict in society began some 25 years ago when he saw, in the Durham Light Infantry Museum, a bullet-holed German Second World War helmet worn by a young soldier shot through the head while in retreat inspired a series of sculptures.

“My father’s family were originally from Germany and I had a sympathy, not for the Nazis of course, but for the ordinary working man who was recruited to fight for a cause that he probably didn’t believe in,” he tells me.

Two of his bronze sculptures from his series Reflections of War, about the Great War, were taken up by the Royal Academy in 2011. 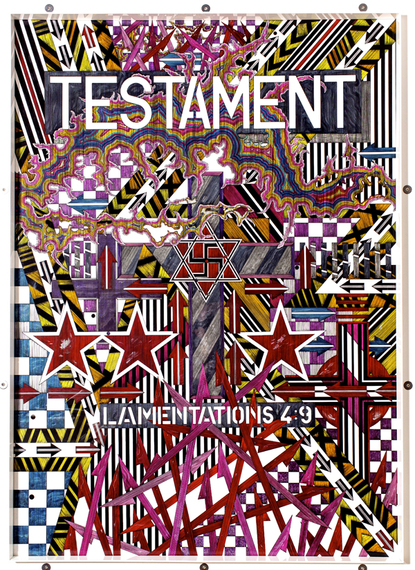 In this exhibition, Testament (above) is a complex painting, entirely abstract, with potent symbols such as the swastika mounted inside the Star of David, the red stars of the former Soviet Union and Biblical references that are a key feature of the artist’s work.

Lamentations 4:9, about those slain by the sword being better off than those who die of hunger, expresses the contradiction and hypocrisy of those who seek to subvert religion to whatever cause.

“Religion and politics are instrumental in getting ordinary people to move in strange directions which they normally wouldn’t do,” he says. The message could not be more contemporary. 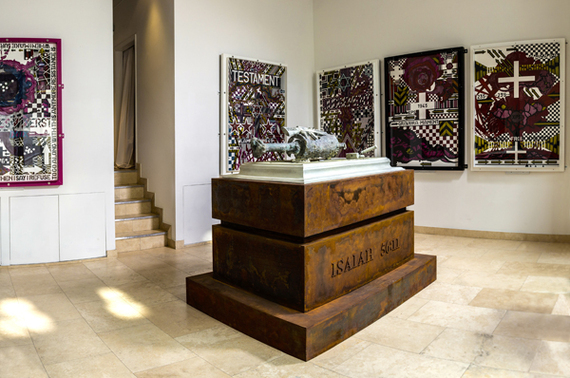 The centrepiece of the exhibition is the sculpture Radix Malorum Est Cupiditas (above) which, coincidentally, in view of the exhibition’s title, is the motto of the Anarchist party, that greed is the root of all evil.

It was inspired by the corruption of the banking world and events in Greece and the Middle-east. The sculpture, mounted on a memorial-type plinth, and expertly cast by the Pangolin Foundry, consists of various relics and symbols of conflict together with text and slogans. Isaiah 56:11 engraved on the plinth (like greedy dogs, they are never satisfied) emphasises the message.

“The text symbolises aspects of the Bible about corruption and greed and I’ve used the Kalashnikov and hammer and sickle, Das Kapital and Folgen (consequences) as references of failed political groups that have rightly or wrongly influenced people.”

Paul Wager describes himself as a proud Northerner without being a northern fanatic. Most of his sculptures are large constructions built of steel, a commodity once associated with his home town of Hartlepool. The steel works have now all closed and unemployment remains at more than 30 per cent. The plight of the ordinary working man is all too apparent.

Living and working in a relative cultural backwater means he has not received perhaps the publicity and acclaim his well-crafted art deserves. However, the relative cheap cost of housing means he can afford the size of studio required to make the often huge metal sculptures that he has committed his career, at some sacrifice, to serve as his art.

The Mask of Anarchy is showing at the Dadiani Gallery, 30 Cork Street, London W1S 3NG until 31st May.

All images are used with the permission of the gallery.