The Mick of Time: Or How to Get More Satisfaction From Your Schedule in 2015 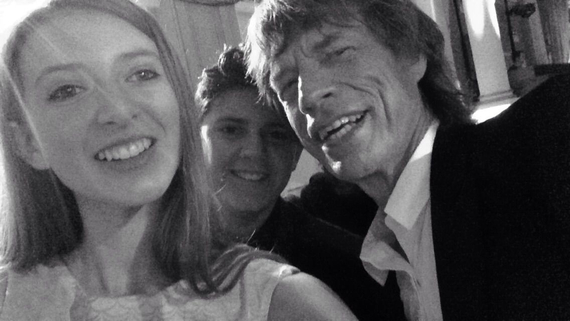 Ok, I don’t know Mick Jagger personally though he was kind enough to pose for this recent selfie and made my two kids very happy. (Thanks, Sir M, you’re a gent!)

What I do know, from my own lifetime in the performing arts, is that he and other musicians understand time rather differently to the rest of the world. And this can be very useful if you want to manage your life better in 2015.

I know if I divide all the stuff I need to get done into the time available the year already starts looking ominously full. But what happens if we think less mechanically and more – musically? How does the year look when you focus less on Time and more on Tempo?

Tempo literally means time (in Italian) but in the world of music, it’s not measuring the duration but the pulse of what’s happening; the rate at which the music unfolds. Whether you are Sir Mick or Mozart, Madonna or Monteverdi, tempo isn’t a problem – it’s an engine, it’s life force, it’s the soul of things.

Tempo is so important in music that it’s the first instruction the composer gives you, right at the top of the page before the key, or time signature, suggesting both the pace and feel of the piece. Andante doesn’t just mean walking pace but also unhurried. Prestissimo means both super fast and also hyper ready.

So how can thinking tempo – not time – help you make more 2015 more productive, less of a slog and more entertaining?

1. Set your own tempo for the year
Sure, there’s lots to get done, but you can set your own tempo for doing it – like a back beat to your life, a soundtrack to your personal film, a deeper rhythm that runs through the daily noise. You’ll find having a private tempo can transform any experience – even routine ones. And if you don’t believe me, try playing a James Brown track in your head while doing the washing up or queuing in the supermarket.

There’s a huge range of tempi to choose from and – this is important – they are all good. Unlike our fast-track working lives where speed is at a premium and doing things slowly can be career-limiting, there’s no value judgement in music about the tempo you choose. Pick one that works for you personally. How about Dolce (sweetly) or Brillante (brilliantly) or Animato (animated), Affettuoso (with emotion) even Furioso (with furious energy)? Me, I am choosing Vivace, to remind myself I can move fast while staying full of life. Remember it’s not just a pace but a mood you’re choosing.

2. Do the same for individual projects
As you are contemplating your To Do list, consider not just what needs to get done but the tempo that’s appropriate for the different activities. Maybe some areas of life need to be approached with 150-beats-per-minute intensity and others like a blissed-out trance track.

3. Build plenty of variation in
If you’re looking for sustained performance, not just exhausting bouts of high performance, build tempo variations into your year. A well-composed 2015 – like a satisfying playlist – will have light and shade. If in doubt…

4. Go with The Seasons
Possibly the most famous classical piece of all time, Vivaldi’s Four Seasons, reminds us that each phase of the year has its own tempo. The exuberant, sap-rising bounce of Spring is utterly different from the cosy reflectiveness of Winter. If you don’t know the piece, or it has become a cliché for you, I urge you to check out the newly recomposed version by my exquisitely talented composer mate Max Richter. It was my favourite piece of 2014.)

We seem to have forgotten this in our Outlook-dominated working lives, where every month is in an identical data field waiting to be filled and where we expect to keep same incessant rate of activity from January to December. For example, I am always puzzled when my business clients propose holding “Kick Offs” in January, when most of us (in the Northern hemisphere at least) are supposed to be hibernating. Look again at 2015 – as four movements – and check the activities you are synch with the seasonal rhythm.

5. Mind the Gaps
“Music is the space between the notes” said the composer Debussy, reminding is that without silence, music would be mushy chaos – or as Einstein wittily put it “the only reason for time is so that everything doesn’t happen at once.” It’s worth remembering this as you set about composing 2015. A great year is not about jamming in as much as possible, but spacing out the action so it has rhythm, pace, flow, groove – just like a piece of music.

The good news is, if you pay attention, there’s plenty of space* available in your calendar. You’ll find space between projects, between meetings, between conversations, between words, even between breaths. In fact it’s mostly space. Look out – or perhaps I should say listen out – for those millions of empty moments hidden in your daily agenda and you suddenly have much more time than you realised.

Don’t fill the gaps with noise. Enjoy them. Balance the space and the action to create a tempo that works for you and turn 2015 into a toe-tapping, hip-swivelling, soul-lifting, finger-clicking, heart-touching, ear-caressing, award-winning, ovation-earning, arena-filling, life-enriching New Year.

* There’s space between home and work – hundreds of hours of it during a normal year. And most of that time we waste hurrying through the streets, heads down, iPhones on, lost in our thoughts. If you want to turn some of that time into inspiration, check our non-profit Street Wisdom. You’ll discover that ‘ordinary streets’ can be a space full of extraordinary learning.