‘The Royals': Joan Collins And Elizabeth Hurley Camp It Up In Trailer For New US Drama About Fictional British Royal Family (VIDEO)

If, like me, you’re still getting over the fact that ‘Footballers Wives’ is no longer on our screens, then I think I’ve found just the thing to fill that trash telly void – ‘The Royals’.

Imagine a world where Elizabeth Hurley is Queen (not a stretch for Lizzy) and *gasps* Joan Collins is the Queen Mum. Just IMAGINE. 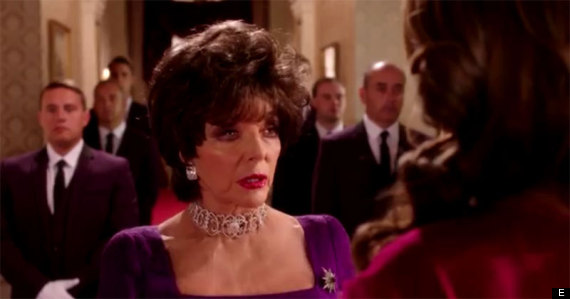 Well, you don’t need to for long because it’s all about to become a (dramatised) reality when the first episode airs on E! in March.

And what with E! being an American network and all, we’re going to get an unabashed, gloriously OTT American-eye view of what it’s like to be a Royal.

Not the Royal family of course.

Elizabeth Hurley would hardly be first choice to play HRH, but she’s perfect as plotting Queen Helena (‘Of course I’m ready, I’m the Queen of England, when am I not ready?’), whilst Joany appears to be channeling Alexis Colby and her alter ego from the Snickers advert to play the Queen Mum (‘I see you’ve redecorated. I’d love to know whatever obsessed you to choose Vegas as your theme’).

Elsewhere there’s lots of sex, drugs and… sword fights, which has had so-called TV critics getting themselves into a RIGHT old tizz.

The Sydney Morning Herald described it as “a bunch of bed-hopping halfwits saddled with… very, very lousy dialogue”, and went on to call it ‘the worst show in TV history’, which makes me want to watch the even more.

Well, it’s not like the real Royal Family aren’t just a little bit ridiculous, is it?