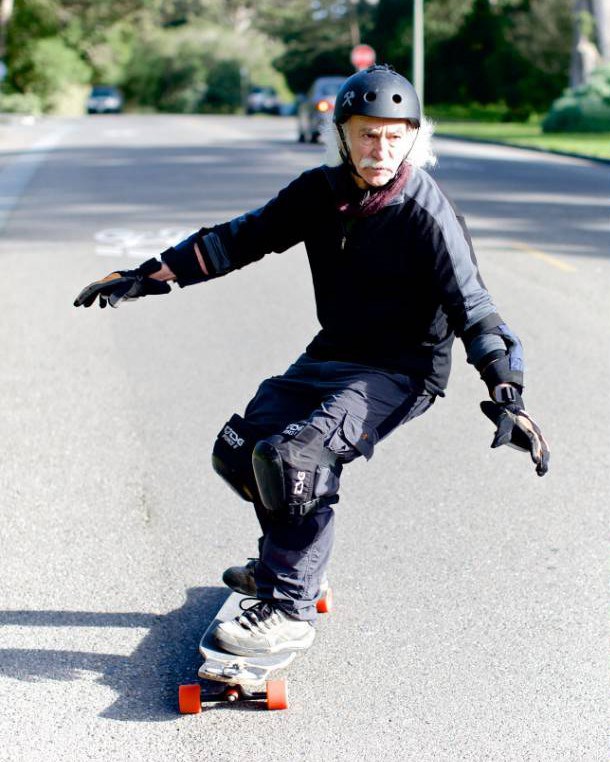 Age is just a number, and a photographer has demonstrated that a simple number should never hold people back from doing what they love.

Vladimir Yakolev’s project The Age of Happiness aims to ‘change your perception of life after 70, 80 or even 100′, according to the project’s Facebook page.

He first stepped onto a skateboard at the age of 65, where he immediately fell and hurt his hand.

Despite his injury, he knew he had found his passion and has continued skating to this day – however he wears lots of protective clothing.

‘I don’t do any special tricks. I don’t ride like the teenagers,’ he said.

She started the practice after being diagnosed with osteoporosis, a condition that destroys bone density.

‘To strengthen my bones, I needed strenuous exercise. But just weight-lifting is very boring,’ she said.

Skrillex ain’t got nothing on Ruth Flowers who became a DJ at the ripe old age of 68.

Now 72, she has performed in clubs all around the world and has no plans to retire from her profession.

Yvonne Dole, 86, has been skating her entire life.

Even after doctors told her to hang up her skates after a serious car accident when she was 80 she continued her passion and still takes part in competitions.

With her carefree attitude, Yvonne said: ‘If I ever get in a bad mood, I look at my peers with their oxygen bags , put on skates and smile.’

So take it from this lot – it’s never too late to find your passion.

MORE: These photographs of children dressed as old people are glorious

MORE: Man is jailed for punching a hole through an £8 million Monet painting